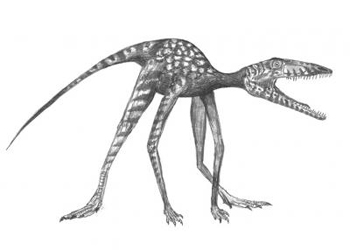 Some 250 million years ago, a creature the size of a cat took a stroll through damp mud in what are now the Świętokrzyskie (Holy Cross) mountains, near Kielice in south-central Poland.

Where this Prorotodactylus isp was going, or what happened to it, nobody knows. But scientists have this week confirmed that the footprints the animal left behind were fossilised over time – and now form important new evidence in the history of life on earth.

The footprints are important because they place dinosaurs on earth nine million years earlier than previously thought.

A report in the proceedings of the Royal Society B says the animal that made the prints would have been a four-legged creature. The report analyses footprints found at three trackways in the mountains – Stryczowice, Baranów, and Wióry. Each trackway is from a different time period. Those at Stryczowice have been identified as the oldest.

It is not surprising that the footprints were found in the Świętokrzyskie mountains. They form part of the oldest in Europe, reaching 612 metres at their highest point. They have provided valuable evidence for scientists hunting traces of dinosaurs and other prehistoric creatures.

One thought on “New Dinosaur Discovered in Poland”