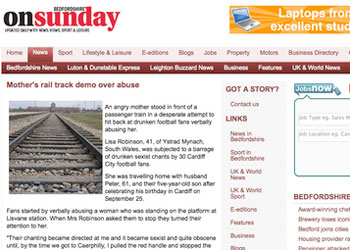 Regional newspapers in the UK have apologised after using a picture of the Auschwitz former Nazi concentration camp near Krakow – to illustrate a story about a rail protest in Wales. A woman had forced the train to stop at a small village by standing in front of it and refusing to move. She was protesting about the behaviour of Cardiff City football fans on board.

At least two newspapers – the Cambridge News and Bedfordshire on Sunday – used the image of the railway leading into Auschwitz to illustrate the story. But the Krakow Post understands that it found its way onto the websites of several other newspapers, all owned by the Illiffe group, before the error was noticed.

The picture and story were provided to Illiffe by the Press Association. A PA spokesman said: “We apologise for any offence caused by this unfortunate human error. The photograph was removed from the story as soon as we realised the mistake and we have taken steps to ensure this does not happen again in the future.”