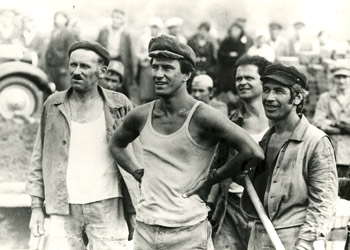 2010 marks the twentieth anniversary of the abolition of state censorship in Poland, a story that began on 7 February 1919, when the Polish Interior Ministry issued a formal Decree on Public Performances. This imposed restrictions on depicting sex, crime and the Polish military, and a 1920 follow-up added a laundry list of proscribed subjects, including contentious religious matters and “images of a nihilistic and corrupting nature”. That said, men in drag singing songs about sex appeal was perfectly OK, as witnessed by hits such as Upstairs (1937), featuring pre-war star “Bodo”.

With the coming of war in 1939, Nazi Germany imposed such strict censorship that Poland’s film industry mainly made moronic comedies. However, post-WWII censorship dwarfed this in ambition, since the communists sought to control every aspect of film production from financing to distribution. Everything was formally vetted by officials from the GUKP (Główny Urząd Kontroli Prasy i Widowisk, or Main Office for Control of Press, Publications and Public Performances), and Politburo members sometimes took an active role in either blocking projects at script stage or banning them after completion.

The notorious Socialist Realist period (1949-56) forced filmmakers to produce cheerfully upbeat work that would be instantly accessible to the masses. Experimentation was banned, and so, ironically, was realism. While it’s fascinating seeing Andrzej Munk and Wojciech Has cutting their creative teeth on drivel like Destination Nowa Huta! (1951, an uncritical paean to the then-new steel town) or Herbalists from the Stone Valley (1952, with wide-eyed schoolchildren picking medicinal herbs to win a projector to screen films about castor oil production), this was one of Polish cinema’s low points.

In autumn 1956, Władysław Gomułka’s administration made significant changes to the censorship process. Now, the treatment, full script and production were supervised by industry officials. Government representatives were only invited to the kolaudacja, or pre-release screening, by which time filmmakers had had plenty of time to devise spurious excuses for problematic material. For instance, Wajda claimed that the ending of Ashes and Diamonds (1958) showed its iconic hero dying “on the rubbish tip of history” for daring to defy the communists.

By this stage, alterations to theme or tone were generally impossible, so “difficult” films were simply banned outright. Since this list ran into double figures by the 1980s, this was an expensive method of censorship. Aleksander Ford’s The Eighth Day of the Week (1958) was an early victim, and Roman Polanski’s short Mammals (1962) didn’t legally exist, because he shot it using leftover film stock from other productions and couldn’t produce receipts upon completion.

Polanski left Poland shortly afterwards, leaving former colleague Jerzy Skolimowski to play a cat and mouse game with the censors. His debut feature Identification Marks: None (1964) was made by cunningly pre-planning film school shorts so that they’d cut together afterwards. Prevented from playing the lead in Barrier (1966), he cheekily cast himself as the face of a blood-donation poster and at one point got star Jan Nowicki to wrap one around his head. But when cuts were demanded to a distorted image of Stalin in Hands Up! (1967) and Skolimowski personally protested to Zenon Kliszko, effectively Gomułka’s number two, the film was banned and Skolimowski was forced into exile.

When Edward Gierek took over from Gomułka in 1971, things relaxed considerably – according to filmmaker Jacek Bromski, “everything was half-hearted, everybody was winking at everybody”. The films of the 1970s, especially the so-called “moral anxiety period”, were far more openly critical, and projects such as Wajda’s Man of Marble, whose script had been published in 1963, were finally greenlit.

Production began in 1976, the year after Wajda ruefully complained that “the art of making a film in Poland is the art of constantly giving up”. What changed was the decision by Minister of Culture Józef Techma to personally back the project. This ultimately cost Techma his job, since Wajda delivered a multi-layered masterwork that not only explored 1950s censorship but also lifted the lid on the hoops that 1970s Polish filmmakers had to jump through. Even before completion, it was such a public cause célèbre that banning it would have been politically embarrassing. In 1979, Krzysztof Kieślowski explored the censorship process directly in Camera Buff, in which a factory worker’s naïve films of his colleagues come under official scrutiny.

This period abruptly ended with the imposition of martial law in December 1981. Recently completed films by Wajda (Man of Iron), Kieślowski (Blind Chance), Agnieszka Holland (A Woman Alone), Ryszard Bugajski (Interrogation) and Wojciech Marczewski (Shivers) were banned, and future projects were threatened, not least when Wajda’s “X” Film Unit (which produced many key “moral anxiety” films) was shut down following a row over Interrogation. Many Polish filmmakers spent the 1980s abroad, while Marczewski fell silent for a decade.

Marczewski’s comeback film, Escape from the Liberty Cinema, was completed in April 1990, within days of state censorship’s formal abolition. Inspired by Woody Allen’s The Purple Rose of Cairo, it concerns a lugubrious film censor who has to deal with the characters in a dismal melodrama going on strike in protest at the banal narrative that they’ve been saddled with after heavy censorship. It’s often very funny, but when the censor is confronted by actors whose careers were ruined by his often arbitrary decisions, Marczewski betrays real anger at a system that stifled so much talent.

But did things improve that much? Holland and Kieślowski wearily acknowledged that economic censorship imposed by the free market was ultimately far more insidious. Because everyone knew how the state system worked, it encouraged a subversive conversation between filmmakers and their audience. The experience of watching Man of Iron on pirate VHS in the 1980s was far more potent than watching a pristine projection of a commercial feature today – and while no one wants to return to the bad old days, there’s a sense that cinema truly mattered back then in ways that are very hard to recapture.