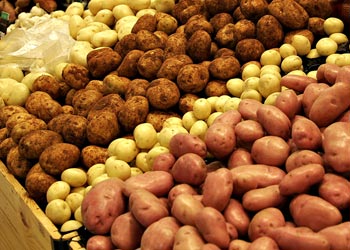 This month’s column is dedicated to the humble potato, a staple of the Polish kitchen to such an extent that Poles consume an average 120 kg per person every year.

It wasn’t always like this. Potatoes came to Spain from South America over 500 years ago and quickly became established as a source of food for people and animals, being easy to grow, versatile and a good source of energy. Poland was no exception and between their introduction in the 17th century and the 1970s, when production was at its peak, Poland became known as “Potato Land”. They were used to make everything from dumplings, noodles and fritters to flour, bread and, of course, vodka.

Encouraged by the clergy preaching the benefits of potato cultivation and consumption from the pulpit, Poles embraced its versatility and different parts of the country developed not only different recipes but often completely different names for the tuber. Many will know that a ziemniak is also known as a kartofel (from the German, kartoffel, as it came to Poland from Austria), but what’s less well known is that a dictionary of regional dialects published in the early 1900s lists over 130 different names for potatoes. There are also numerous regional dishes based on the potato, often unknown to Poles from neighbouring regions. While potatoes in a fire, new potatoes with dill or potato pancakes are common all over Poland, not everyone from Małopolska will be familiar with the potato sausages (kiszka ziemniaczana) found in Podlasie in the northeast, or even black dumplings (kluski czarne) from Silesia.

Over the last 40 years, Poles (and their animals) have been producing and eating fewer potatoes, prompting the National Potato Institute to look for ways of developing and encouraging farmers to grow newer, tastier and more useful varieties. There are great hopes that the growing love of chips and crisps, the world’s favourite foods, will help convince farmers to grow potatoes rather than wheat, which is more profitable and more easily stored. However, this won’t be of much help to the legions of small Polish farmers who can’t supply the large quantities and uniform quality that the big food processors demand.

A recent decision by the European Union has also opened the door for the introduction of a genetically modified (GM) potato developed by chemicals giant BASF. In March, it authorised the cultivation of the Amflora potato in the EU, only the second GM crop to be approved in the last 12 years. Amflora is a high starch potato that has also been manufactured to be resistant to antibiotics. It’s not for eating, but instead it will provide a raw material for the animal feed, fertiliser, adhesive and paper industries.

This decision has caused controversy throughout Europe, where most consumers are against the introduction of genetically modified organisms (GMOs). In Poland, the International Coalition to Protect the Polish Countryside, like Greenpeace, is concerned that the Amflora potato’s antibiotic resistance could disrupt the ways in which harmful and beneficial bacteria in our ecosystems are kept in check and are campaigning against the introduction of trial plantings. To this end they are organising a “GMO-Free Potato Day” and a series of events that will take place across the country over the weekend of 8-9 October.