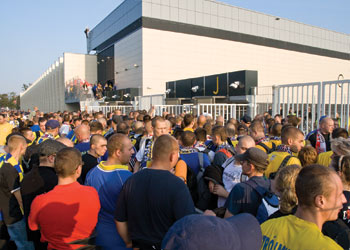 Poland’s two oldest football clubs, KS Cracovia and TS Wisła Krakow, both celebrated at least partial re-openings of their home fields in September after over a year of playing as guests at other venues. The modernised stadiums promise vastly improved features and much larger capacities than their previous versions.

While the Cracovia stadium, which for a generation has been the lesser of the two, has been completely demolished and replaced, the Wisła stadium has been under ongoing redevelopment for several years, with new stands being added in stages. The closure of the Wisła arena over a year ago was intended to finalise that process, but design issues have pushed the date back and left impatient fans fuming. The more modest Cracovia stadium, in contrast, was opened after only brief delays and to fanfare that included a ceremony featuring the city’s mayor, Jacek Majchrowski, but comes at the same time that reports have emerged that the club may be thrust into a criminal corruption investigation over how it miraculously avoided relegation in the summer of 2009.

Now, as Wisła’s fans and players pine for home, construction goes on and on. Progress in the ongoing expansion of their refurbished home, Henryk Reyman Municipal Stadium, has run into more than a few hiccups. It was initially announced by city transportation and infrastructure official Joanna Niedziałkowska, who also headed the city’s failed bid to host Euro 2012 matches, that the grand reopening would take place in June 2010, but problems with the plans were uncovered with construction well underway. Amongst a multitude of other issues, the original designs foresaw the two teams entering the pitch from dressing rooms on opposite sides, which is plainly contrary to UEFA rules. As a result of repeated and sometimes drastic revisions to the blueprints, the official inauguration has since been postponed repeatedly, and the current tentative date in late October also looks doubtful, as whole sections are still missing staircases and seats. More realistic projections now put the opening ceremonies in January. The project is also reported to have run wildly over its budget of five hundred million złoty. When completed, the stadium is to have a capacity of just over 33,000, and will have cost at least seven hundred million złoty.

The city authorities have, nevertheless, reopened those stands that have already been completed for two matches, and the first crowd gathered to witness the occasion of Poland’s 1:2 defeat at the boots of Australia’s Socceroos on 7 September. Wisła’s own fans, the “White Star Division”, got their first chance to see the club draw against Korona Kielce on 19 September. Not least disappointed with the lack of a proper home field on which to enjoy an advantage are Wisła’s players, of whom Paweł Brożek directly attributed the club’s failure to secure the championship this spring to playing away from home.

Cracovia, meanwhile, kicked off the new era on 26 September with balloons, music, and a much-needed victory. The former stadium, which was little more than a fenced-in depression with a bicycle track and a grandstand, surrounded by a bare steel fence painted red and white, has now been supplanted by a modern, elegant, rectangular building with amenities like plumbing and a more secure, segregated section for 350 visiting fans. The club has mounted a city-wide advertising campaign to bill the new venue as a safe, modern, family-friendly environment to counter public perception of its fans as an aggressive and dangerous mob.

The opening ceremony for the Cracovia’s Józef Piłsudski Stadium played to a joyous and nearly full house of about 12 thousand, including speeches from dignitaries, a performance of the club anthem by sometime Polish pop star and Krakow resident Maciek Maleńczuk, and the release of thousands of red and white balloons into the sky, followed by a fireworks display. The team then went on to slog its way to a rare victory against Arka Gdynia, whose fans are allied with Cracovia’s and shared in the celebration of the new arena. It was later announced that the city and club are in discussions concerning the construction of an indoor sports facility to be built next door.

Meanwhile, reports have begun to surface of an investigation being opened by the Central Anti-Corruption Service into how the club avoided relegation to the first league after the 2008/2009 season, when Cracovia ended the season slated for demotion, but miraculously avoided being sent down when ŁKS Łódź was instead demoted on corruption charges, allowing Cracovia to stay by taking over the empty slot. The drive to investigate Cracovia in the matter has been spearheaded for months by the vice president of Łódź, Włodzimierz Tomaszewski. The suspicions hinge on the longtime association with the Cracovia organisation of a key member of the committee who made the decision to revoke ŁKS’s top league license.