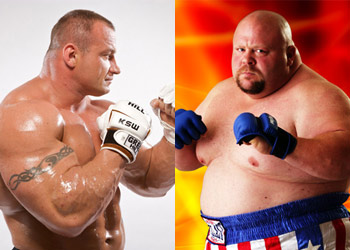 In a video circulated by the promoters, the almost spherical Butterbean intimated that Pudzianowski was insulted when he heard that the Alabama native had harshly critiqued Pudzianowski’s fighting technique, suggesting that the Polish bodybuilder “fights like a girl”. The Bean also boldly declared that he would knock the Pole out. At fight time Pudzianowski, who goes by the somewhat less illustrative nicknames “Dominator” and “Python”, proceeded to almost immediately roll Butterbean onto his back and sides, then punch the flailing former boxer in the head until, seeing no way up, Esch tapped out.

The win was Pudzianowski’s third in his career of four fights, and his second by submission. Butterbean’s loss was his 20th in 120 professional MMA, boxing and kickboxing bouts, not counting his championship professional wrestling career, which ended this May.

Butterbean, who is to retire once all of his international contractual obligations are completed, stated after the fight: “I never said he fought like a girl. I said he hit like a girl. His takedown was good. I can’t complain. He won.”