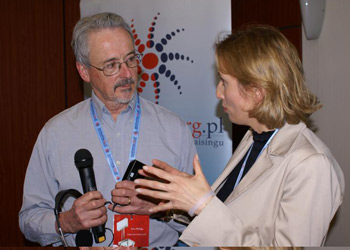 Using mechanisms available in the American political and business climate, Mary Daley Yerrick co-founded and now directs the Vital Voices Global Partnership, an international women’s empowerment organisation. On 17 September at the American Embassy in Krakow she presented a talk on the subject of fundraising for non-profit organizations as it relates to corporate social responsibility and public-private partnerships. Attending Ms. Yerrick’s presentation were members of various Polish non-profit organizations with focuses ranging from the environment to the fine arts. The executive chairman of the Polish Fundraising Association (Polskie Stowarzyszenie Fundraisingu), Robert Kawałko, was also present during Ms. Yerrick’s speech, and later spoke with the Post about the future of fundraising in Poland, as he sees it.

After becoming familiar with the U.S. model for fundraising while abroad, Robert Kawałko approached the U.S. Embassy in Poland and told them his plans to promote the same mechanisms here, in the Polish market. When he was asked if he wanted help in bringing funding from America to the Polish non-profit sector, he said he was more interested in building a culture of philanthropy at home, within Polish society. At the end of this meeting, he was told by the Embassy staff that his idea would probably not be possible. Even so, he somehow managed to walk away with his first donation of 3,000 USD from the State Department and went directly to register his organization. Since that fateful day in 2003, he has expanded his donor base to over 200 members and relentlessly works to expand fundraising opportunities in Poland. His organization also works with other NGOs throughout Central Europe, in Hungary, the Czech Republic, and Slovakia, to exchange best practices and find new ideas for funding non-profit endeavours with the help of EU funds. In November the European Fundraising Association will host a meeting of fundraising organizations from 15 European countries here in Krakow with similar aims.

When asked what the impediments were to fundraising in Poland, Mr. Kawałko pointed out several factors. While the trend of corporate social responsibility is slowly spreading to Polish businesses, the government cannot yet afford to offer tax incentives to corporations for donations. Unless approaching international companies, the corporate donor is a difficult one to pursue in the Polish market. On the other hand, the government does allow individuals to grant one percent of their personal taxes towards a charity or non-profit of their choice. This amounts to about 500 million złoty this year, but it is spread thin among thousands of vying organizations. While this is a valuable source of funding for some organizations, less than half the population actually uses this mechanism to redirect tax dollars. Other countries, such as Slovakia, have increased the amount of possible donations to two percent per person, which Mr. Kawałko claims is a step in the right direction. This economic setting makes private individual donations the most viable means of providing a steady stream of income to the non-profit sector.
There are various examples of success stories working off this model in Poland. They range from big budget organizations, like actress Anna Dymna’s Mimo Wszystko (Against the Odds) foundation, which brings in an operating budget of 30 million złoty per year in order to provide care for mentally disabled adults, to smaller success stories: a group of Franciscan missionaries working to build a school in Chad raised 130 thousand złoty in just two months through an online campaign (www.czadowatablica.pl) and over 300 thousand złoty from three promotional events conducted on the Main Market Squares of Krakow and Wrocław.

What advice would Mr. Kawałko give a fledgling non-profit when approaching the daunting but inescapable task of fundraising? First and foremost, an NGO has to create a strategic plan of development. In making this plan, its possibilities should cover not only immediate needs, but further goals, so no money is turned down once the basic goals have been met. Next, a database of potential private donors should be created, drawing on personal and business contacts, as well as other stakeholders and even relatives. At this stage, social media tools such as Facebook and Twitter may be invaluable.

“Everyone you know is a potential donor,” says Kawałko, and should therefore be put in this database. After compiling and ranking this list according to potential, the organisation’s website and professional image should be tailored to reveal its needs to the public. According to Mr. Kawałko, many organizations make the mistake of trying to pretend they are a perfectly operating entity on their webpage by hiding what they are lacking in order to accomplish their goals. While creating a dazzling image of success, this unfortunately gives potential donors no reason to continue investing in such a project.

Once an NGO has stabilised its social capital by doing all of the above, it can begin raising funds. He quickly adds, “The first donors should be members of the board of directors, because if they cannot lead by example and show they have a stake in the organisation, they probably cannot be trusted to run it. Only once you have given yourself, can you then ask.” This may be something to keep in mind when then searching for fundraising candidates to run the campaign. In choosing a fundraising workforce, a company should not limit itself to the most obvious choices (often young, cheap candidates, who can be unpredictable). Consider using someone big, a well recognized name, or someone over age 50 (more predictable). Kawałko quips, “the mothers of the most obvious candidates can often have more potential”. Lastly, he concludes, “Have patience! Do not give up early in attaining your goals.”