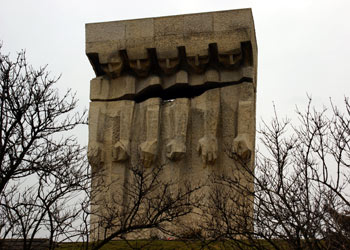 For 65 years, the grounds of the Płaszów former concentration camp have not seen a proper commemoration of the Nazi genocide. Whilst major change seemed on the cards in 2008, Krakow’s municipality has now suspended the redevelopment program.

Płaszów owes its fame to the film Schindler’s List. However, after the premiere many tourists were disappointed with what they actually saw on the spot. A quiet, vast, undulating wasteland overgrown with high grasses, weeds and the occasional tree is all that is left of Konzentrazionslager Plaszow, the Nazi concentration and forced labour camp for the area during World War II. A large yet lonely monument for prisoners who perished there was erected soon after the war, yet, as neighbours confirm, there has not been a day when somebody would not visit the place, whether Jewish or Christian. Some are more appalled by the scores of homeless carousing there, some by Cracovians sunbathing and picnicking on mass graves, not realizing fully the history behind the place.

Unlike the newly-opened Schindler Factory Museum on Lipowa Street, visitors are not officially presented with anything even resembling an exhibition about the former camp and have to depend on a guide, whether in person or a book. “Jewish guidebooks include whole sections on the Płaszów camp, and foreigners ask me whether the ground is intended to become a part of the Schindler Museum. What can I say to them? The Krakow authorities seem to be blind to their own interests and do nothing to take proper care of the Płaszów camp,” says Jan Grabiec, owner of the so-called “Red House”, the villa at 22 Heltmana Street taken over by Nazi Camp Commandant Amon Goeth. For years he has tried to persuade the Krakow authorities to buy the villa and arrange an exhibition about the Płaszów camp there together with his Schindler Foundation, established to uphold the memory of the Płaszów camp atrocities. “I keep a guestbook with signatures of all visitors coming to see the Red House to prove that interest in the Płaszów camp and the Red House is real,” added Grabiec.

“City authorities do not have any intention of buying Amon Goeth’s villa, as it used to be the seat of a war criminal,” says Filip Szatanik, a spokesman for the municipality.

“In my opinion, the Red House should be somehow included in the revitalization program to avoid it becoming a Mecca for neo-Nazis,” says Professor Andrzej Chwalba, a historian at the Jagiellonian University.

It is not clear why the city has not made progress with a development project. After years of fruitless attempts the authorities explained that lack of change was due to the complicated legal status of the area, while it continues to slowly deteriorate, and has even been vandalised with anti-Semitic graffiti, as happened a day before the Krakow Ghetto liquidation anniversary this year.

In 2008, the municipality held a contest for a revitalization project of the Płaszów camp grounds. The winning concept by the Proxima Design Group included illuminated niches in the main barrack ground symbolizing prisoners, as well as reconstructing the outline of the barracks with limestone slates. A multimedia bridge was to stretch over the grounds to enable a good view of the place. According to architect Borys Czarakcziew, a representative of Proxima, the main idea was to introduce the tragic history to contemporary Cracovians, many of whom hold a rather murky idea of the war history of Krakow, but the original project was protested against by former prisoners and Jewish community representatives as interfering too much with the structure of the Płaszów camp premises which, besides being a site of wartime martyrdom, were originally built by the Germams over a large Jewish cemetery. According to Józef Rosołowski, a chairman of the Political Prisoners of Nazi Prison and Concentration Camps Union in Krakow, it was also wrong not to consult former prisoners in this matter. A cemetery, he says, should be a place of meditation, and illuminating graves with electric light is not a part of Polish culture, but rather a Hollywood fashion. Jewish community leader Tadeusz Jakubowicz insisted the project requires disturbing the ground and thus violating Jewish law.

The project was revised in December 2008 following the suggestions of all of the parties concerned, but it was not launched due to several ownership issues, such as positive prescription claims or a need for a judicial trustee establishment. A ray of hope appeared to emerge when a bill was proposed to convert Płaszów’s status to a government-protected Nazi genocide area, similar to Auschwitz. “Taking direct responsibility over Płaszów by the Ministry of Culture and National Heritage was a part of a bill developed in 2009 and coordinated by Deputy Minister Tomasz Merta, who died tragically in the Smolensk plane crash this year,” says Iwona Radziszewska, a spokeswoman for the Ministry, adding that the bill still needs major consultation and thus it has not yet been decided whether or not the Ministry would take over and revitalize the Płaszów camp ground.

In the meantime, the Community Infrastructure and Waste Administration, which is the municipal investor, and the Architecture Department of the municipality lay the blame for not completing legal procedures earlier on each another. It seems that deciding whether it is all about prestige, historical truth or the 25 million złoty dedicated to the project might prove even more difficult.

One thought on “Płaszów: Place of Unrest”