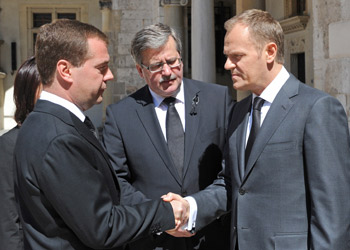 It is hardly surprising that the British historian Norman Davies chose to call his two-volume work on Poland God’s Playground. The country’s strategic place on the European map means it has always been in the front line of conflict of one sort or another. Diplomatic and economic leverage may have replaced guns and bullets, but it is clear that Poland still treads a delicate line between Russia to the east and its fellow EU Member States to the west.

When Akhmed Zakayev, Chechen leader in exile, was arrested in Warsaw last month and subsequently released, it seemed publicly to set Poland and Russia at loggerheads. Russia wants to try him on terror charges, but the Polish public prosecutor said Zakayev’s political asylum status granted in the UK applied across the EU.

The Russian news agency ITAR-TASS reacted with a predictable, outraged polemic, featuring the headline: “Exiled warlord wanted in Russia arrives in Poland without hindrances”, complete with a photograph of Zakayev resembling a sort of demonic Rambo, bared teeth and all. Gazeta Wyborcza was equally strident with its triumphant headline: “Zakayev Free”. Barely anyone noted the quiet moderation of the Polish Border Guard, whose spokesman Colonel Wojciech Lechowski said simply that the Guard would “follow the law” regarding Zakayev’s future movements.

Yet it is with just this kind of reasoned, pragmatic response that diplomats in both Warsaw and Moscow intend to continue building the relationship between Russia and Poland. They insist that the affair is a “minor hiccup” that is only to be expected. Adam Rotfeld, the man with the responsibility of curing such hiccups on the Polish side, told The Economist magazine that there would be no “long-term negative effects” on Russian-Polish relations at the highest level.

It certainly isn’t the first time since Polish independence that a case of hiccups has shaken the public perception of these relations.

In 1992 Boris Yeltsin, the then-Russian president, showed good will by admitting that Stalin and Hitler planned to carve up Poland during the Second World War, and that Stalin ordered the Katyń massacre of almost 22,000 Poles. In 1993 the final Russian troops left Poland, and Yeltsin made a state visit to Warsaw. Russia and Poland seemed, if not friends, at least on nodding terms.

Relations cooled over Poland’s admission to both NATO and the EU. In 2004, the year that Poland joined the EU, it also helped overturn the results of a corrupt presidential election in Ukraine – leading to the removal of Russia’s favoured candidate and a victory for the pro-Western Viktor Yushchenko.

This was followed by a scuffle over meat exports from Poland to Russia. The latter imposed a ban, which was lifted only when Poland agreed not to block Russian attempts to enter the Organisation for Economic Co-operation and Development (OECD) in 2007. By thta time, Poland had sent Vladimir Putin into a fury by agreeing, in principle, to a request from the United States to install a missile defence system.
Meanwhile, it was perhaps unnecessary mischief for Warsaw to name a roundabout in honour of Dzhokhar Dudayev, the first president of the self-proclaimed independent Chechnya in 2005.

It is three years since the last major “incident”, (the spat over the American missiles), and there is no escaping the fact that Poland is a strong and active member of the EU, with increasing influence. In the first half of 2010 alone, Polish businesses invested the equivalent of 2.3 billion euro in foreign markets – mostly in Europe. The National Bank of Poland said that was already more than the total overseas investment for 2009. Poland’s competitiveness in the European market is the envy of many regional neighbours, with only Estonia and the Czech Republic scoring higher. President Borisław Komorowski wants to further strengthen Polish economic and political ties with the rest of Europe, principally by breathing new life into the “Weimar Triangle” diplomatic agreement between Poland, France and Germany. And this month, the Polish Cabinet will discuss the National Euro Framework Strategy, with a view to drafting a plan for Poland to adopt the euro as its national currency. Strengthening military ties, General Mieczysław Bieniek was sworn in as a Deputy Supreme Allied Commander with NATO at the end of September – the highest post a Polish officer has yet held within the organisation.

Poland’s increasingly close integration with the EU may still irritate the Kremlin’s hard-line traditionalists, but Moscow’s moderates take a different view. In collaboration with their counterparts in Warsaw, they have arranged for Russian President Dmitry Medvedev to visit Poland in December. Medvedev made a notably positive impression on Poles when he came to Krakow for the funeral of Lech Kaczyński in April. Indeed, in spite of fringe conspiracy theories, the Smolensk tragedy saw something of a thaw in Polish-Russian relations, with much earnest talk of healing old wounds. Matters may have cooled somewhat since then, but both nations’ Foreign Offices continue to work closely over border crossings between Poland and the Russian enclave of Kaliningrad. Crucially, both parties have expressed hopes that these talks will strengthen relations between Poland and Russia, and that they will open doors for Russia and the EU to cooperate more closely. Germany and France have been working to this end too, urging “an elevated cooperation on security policy”.

The crux seems to be that, if Russia really wanted to blatantly sour relations with Poland – rather than rattle swords in diplomatic spheres as it so frequently does – it could do so only at the cost of a rift with the EU as a whole. This is something that Moscow’s pragmatists understand to be neither economically nor politically desirable, for either party. Critically, while Russia deals with the Caucasus and the southern edge of the former USSR by military means, it uses economic leverage in its dealings with Europe. And the biggest lever that Russia has at present is gas, as the Ukrainians are so acutely aware of, (having had their supplies cut off in the peak of winter).

The EU is pushing to bypass reliance on Russian gas with a “solidarity bill”, which would oblige the EU to intervene if any one member declared a shortage. More than one would trigger a state of emergency. Polish MEP Bogusław Sonik, representing the Civic Platform, warned that Europe “cannot be reliant on one supplier”. By one supplier, he most certainly meant Russia.

On the other hand, Poland currently receives 70 percent of its annual gas consumption from Russia. And yet it is facing a winter energy crisis because, as the Krakow Post went to press, a deal to ensure supplies from Russia until 2037 had still not been formally sealed. It hasn’t helped that Russia and Germany have spoken of the possibility of a pipeline between the two nations, bypassing Poland. It is in the diplomatic outcome of this issue, with its economic intricacies, tripartite considerations, and opportunities for Russia to exercise real power, that a measure of the state of Polish-Russian relations could truly be taken.