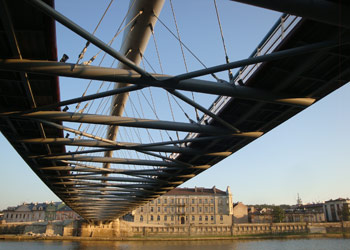 The long-awaited pedestrian and cyclist bridge linking the Kazimierz and Podgórze districts across the Vistula River will open tonight after nearly two years of construction. Officially called the Laetus Bernatek Footbridge, the 38 million złoty structure is named after Father Laetus Bernatek, the Cracovian monk who constructed the Bonifrater Hospital in Krakow.

Tonight’s opening ceremony, beginning at 6:30 pm, will include a concert by two jazz groups, as well as a fireworks display. At 7:30 pm, an exhibition titled “Father Laetus Bernatek and His Work” will open along the Vistula boulevard. The bridge will be officially opened to the public at 8 pm by Mayor Jacek Majchrowski along with a fireworks display.

The 145-metre long footbridge stands between the Piłsudzki and Powstańców Śląskich bridges, and will be a safer alternative for pedestrians and cyclists as well as the disabled, which the bridge is fully prepared to accommodate.