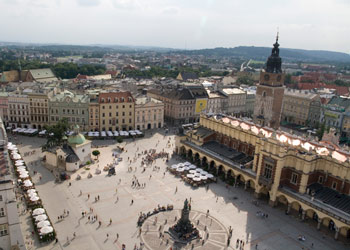 Because everyone could use some advice on saving a złoty or two, we’ve put together a few ways to keep your stay in Krakow under budget, whether you’re just passing through or looking into staying a little longer.

1. Skip the hotel. Stay in a hostel or, during the summer vacation months, a student dorm.

When searching for a hostel, it is best to do price comparisons, or let a hostel booking service do them for you. Rates range from 35-90 złoty/night, depending on whether you’re sharing a room or not. A little known fact among travellers: during the summer months when students usually head home, student dorms (called “akademiki” or “hotel studencki” in Polish) rent out their rooms for short stays at bargain prices as well. Try Piast, Żaczek, Nawojka, or Bydgoska, all of which have information available in English online.

2. Rent a bike! You can take a bike tour of the town to familiarize yourself with your new surroundings (such services offered by bike rental places like Cruising Krakow) or hop on a city bike at one of the 16 automatic bike rental stations around town. Student Hotel Piast also rents bikes for 24 hours at a time with prices as low as 24 złoty for students, 30 without student ID. If cycling is not your thing and you want to avoid a 30-45 minute walk across town, just buy a 15 minute tram ticket for as little as 90 groszy (discounted price for students, elderly, and disabled). Otherwise, enjoy this extremely walkable city as most do, on foot.

3. For delicious and cheap traditional Polish cuisine, eat at places marked “bar mleczny” (literally means milk bar, but denotes a formerly government-subsidized canteen), or a 24-hour “pierogarnia” (specializing in, you guessed it, various styles of pierogi), and/or anywhere you see hordes of locals stopping in for food.

4. Don’t pay more than eight złoty for a beer at a bar, unless it’s a very special brew. Though higher prices may seem right to your home country standards, it’s a rip-off here. Cocktails should be in the 15 złoty price range.

5. Check for cheap trains, like the InterRegio (IR), going to/from other Polish cities, like Warsaw (40 złoty) and Wroclaw (37 złoty)… but be sure to board early to reserve a seat! An even cheaper, albeit sometimes less comfortable option is taking a bus. Jordan and Eurolines buses can usually get you where you’re going for less than train/plane fare, while minibuses depart the main bus station regularly to places throughout the Małopolska region.