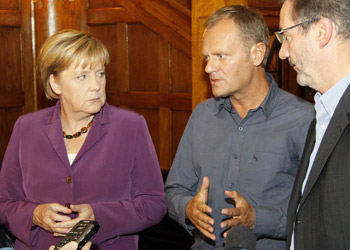 Poland’s Prime Minister Donald Tusk and Health Minister Ewa Kopacz have visited Germany to pay their respects to the 13 Polish holidaymakers killed when their coach crashed as it returned from Spain.

The ministers also visited survivors of the crash, which left 29 other passengers on the coach seriously injured. The accident happened in the state of Brandenburg, near Berlin, at around 10:30 am on Sunday, 26 September.

Reports from the Associated Press immediately after the crash said the coach was in a collision with a Mercedes which was joining traffic on the A10 autobahn. Arne Feuring, president of police in Frankfurt an der Oder, said it appeared that the car crashed into the coach, forcing the driver to smash into a bridge support. Eyewitnesses among the 49 people on the coach confirmed initial reports about the accident.

The German Chancellor Angela Merkel and Foreign Minister Guido Westerwelle have both expressed their sympathies, and said German authorities would do everything possible to help the injured.

The families of the victims have been informed. The names of the dead will be made public on 4 October at noon.

Those injured have begun to return home to Pomerania in northwest Poland. At least four have completed the journey, with another due home 1 October. The driver of the Mercedes was said to have been injured, but her life was in no danger. A formal investigation has been launched.