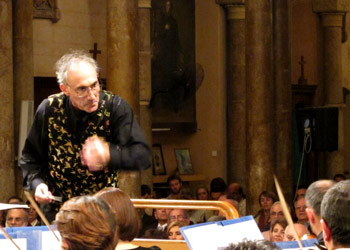 Maestro Charles Ansbacher, whose great passion was to bring orchestral music to the public and to those corners of the world where it was needed most, died on 12 September. The founder and conductor of the Boston Landmarks Orchestra, Ansbacher succumbed to an incurable brain tumor. He was 67.

As he struggled with his illness in recent months, he courageously stayed on the path of his lifelong journey in music and conducted live performances for tens of thousands of people from Boston to Hanoi.

In July, Ansbacher brought the first-ever symphony orchestra to Boston’s Fenway Park and in April he lifted his baton as the only American ever to lead the Vietnam National Symphony. He made return performances to Sarajevo and to Beirut and he completed his final summer season featuring Beethoven symphonies on the Charles River Esplanade.

The final days of his life were spent surrounded by family and friends in his grand and welcoming home on Brattle Street where he lived with his wife of 25 years, former Ambassador Swanee Hunt.

In the long shadows of a recent afternoon, he sat on the couch amid the eclectic mix of art, photography and musical instruments gathered through a life in music and diplomacy that took him and Hunt all over the world. He reflected on the meaning of a career in which he led major orchestras in more than 40 countries. “Let me say my goal was not to be global. My goal was to be a conductor, to enjoy making music and sharing music,” he said.

“I don’t believe music can change the world. But I do believe it’s a language, an international language of emotions that allows us all to communicate. I do think there is a lot to be gained by people understanding each other and appreciating each other and I hope my music helped in that way,” he added.

He then politely apologized as he checked the time, saying he needed to prepare for a concert that evening on the Charles River Esplanade at which he was to be named conductor laureate. It was 1 September and it would be his last performance.

Born in 1942 to parents who were noted psychologists, Ansbacher said he was strongly encouraged by them to pursue a talent for music. He first took up the cello and then began his conducting career as a teenager when he led a Mahler piece with his high school orchestra in Burlington, Vt. He went on to Brown University where he started as a major in physics. He then switched his concentration to music after creating a successful chamber orchestra with a group of classmates. Ansbacher further studied music at the University of Cincinnati in Ohio and at the Mozarteum in Austria.

For a brief time he taught music and conducted, and then he moved to Colorado where he helped to build the Colorado Springs Symphony. In 1976, he took a leave of absence and entered public service in Washington, D.C., where he served as a special assistant to the secretary of transportation. He specifically helped to shape legislation that granted federal funds for mass transit projects to be spent on the arts. He eventually returned to Colorado where he played a leading role in designing the Denver International Airport.

Ansbacher was forced to improvise a bit in his career when his wife was appointed U.S. ambassador to Austria in 1993. He would bring his conductor’s baton to places where he found suffering and the need for music, which ignited a passion.

Throughout the next 15 years, Ansbacher brought the healing power of Beethoven, Mahler and Copeland to countries emerging from conflict, tumult and unrest. He conducted in Johannesburg, Jerusalem, Colombia and Kyrgyzstan. But perhaps his mostlongstanding commitment was to war-torn Sarajevo, Bosnia, where he directed a total of 25 times.

Bosnian refugee and longtime colleague, Mirsad Jacevic, said, “Maestro Ansbacher was a true hero for the people of Sarajevo, and of all Bosnia. He brought music back to a city wounded by war and destruction… He replaced hatred and hurt with compassion and love for all, making us feel part of the human family.” President Bill Clinton once called Ansbacher “the unofficial ambassador of America’s music”.

In addition to his life in music, Ansbacher was also a dedicated community leader who served on many boards, including the World Affairs Council and Urban League in Colorado Springs. In Boston, he served on the boards of First Night, the Commonwealth School and the International Institute of Boston. For 25 years he served as treasurer of the private family foundation, the Hunt Alternatives Fund. Ansbacher also served on GlobalPost’s Board of Directors.

GlobalPost CEO Philip Balboni said, “I’ve watched him conduct many times and seen the passion he brought to his music as well as the joy he both took and gave in its presentation. I marveled at his unflagging commitment to bringing great symphonic music to world audiences. I also knew Charles from his involvement with GlobalPost. He believed deeply in our mission and was so proud of what we were building. I will miss him greatly.”

Ansbacher leaves behind his wife, Swanee Hunt, and his children Henry Ansbacher, Lillian Shuff and Theodore Ansbacher-Hunt; his grandchildren Alex, Max and Ella Ansbacher; and his brothers Max, Ben and Ted.

Hunt said of her husband, “Concerts, audience members and passengers can be counted, but the impact of his ideas is incalculable. He imagined opportunities where others saw barriers. How many of us have dreamed bolder dreams, reached unimaginably farther, because of his stubborn encouragement and prodding? Our work is an extension of his work – no, of his life.”