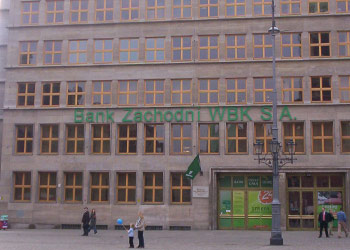 The Polish Financial Supervision Authority (KNF) temporarily froze the takeover of Bank Zachodni WBK by the Spanish giant Banco Santander, the largest bank in the eurozone. Last week, Santander announced that it had reached a deal to buy Allied Irish Bank’s 70 percent stake in Bank Zachodni for 2.94 million euro.

BNP Paribas and PKO BP, the largest Polish bank, who rivalled Santander in the bidding, claimed that the Spanish group had better access to information about Bank Zachodni. The KNF is now investigating the AIB deal with Banco Santander to check if confidential details about the transaction were exchanged before the final round of bidding.

According to Polish newspaper Rzeczpospolita, BNP Paribas had the best bid, offering 210 złoty (53 euro) per share to AIB during the last confidential auction that allegedly took place at the end of August. “There are doubts, which we will investigate to see what the flow of information was,” said Łukasz Djnowicz, a spokesman for KNF. BNP Paribas instead declared it will send a letter of protest to the European Commission on the matter.

After buying PTF, a Polish car-financing bank through Santander Consumer Finance, in 2009 the Spanish giant integrated its consumer finance businesses with the American International Group (AIG) taking over the management of the newly-merged company.

With 519 branches in the entire country, the Wrocław-based Bank Zachodni is the third largest bank in Poland by branches and profits. In a conference call Santander revealed its plan to cut 2,000 positions.

The merging of Banco Santander with Bank Zachodni caused mixed reactions amongst Polish politicians. “The world keeps turning” said Polish Prime Minister Donald Tusk on Wednesday to the Spanish news agency EFE, explaining that the government will not interfere in the transaction approval process.

“The value of Bank Zachodni is overestimated”, declared the Polish minister of the state treasury, who holds 40.99 percent of the shares of the state-controlled PKO BP, one of the main competitors in the Bank Zachodni takeover.

Tusk’s government is concerned about the growing foreign management of the Polish banking sector, which is mostly controlled by nonnative companies (70 percent currently). Therefore, banking experts assume that PKO BP will try to take over another bank, Polish bank Millennium, Kredit Bank or maybe BRE.

The upcoming merging of PGE, the largest power producing company in Poland, with the Gdansk-based Energa, confirms Poland’s orientation toward the creation of partially state-controlled national champions in key sectors of its economy.