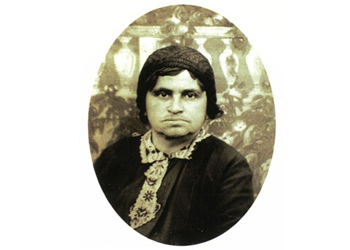 Despite the dismal rain, a group of Cracovians gathered on Saturday, 11 September, to commemorate the 100 year anniversary of the death of someone who might otherwise have fallen into oblivion. Marcelina Kulikowska: poet, pedagogue, writer, emancipator, patriot, one of Poland’s first female reporters and a strong advocate for the education of women. The “Walk Around Krakow in the Footsteps of Women’s Education” was part of a project called The Krakow Trail of Women (Krakowski Szlak Kobiet), sponsored by the Małopolska Institute of Culture (MIK) under a spotlight series called “worth remembering”. Krakowski Szlak Kobiet has organized a series of walking tours held to highlight the footsteps of often forgotten, though certainly outstanding, ladies of Krakow.

Wandering the historic streets of the city with a lens focused on women’s empowerment, the group passed landmarks such as the Ursuline convent, the house under the Atlantans, and the first school for women in Krakow. Agnieszka Julia Dudek, from MIK, who participated in last Saturday’s tour, describes the stories told at the Jan Matejko Academy of Fine Arts of women who painted in the shadow of their husbands or even dressed as men in order to fulfill their dream careers. At the Collegium Novum of the Jagiellonian University, tales were relayed of the first women to attend college there, namely Stanisława Dowgiałło, Janina Kosmowska and Jadwiga Sikorska. The most memorable story of the tour was that of the tragic title figure of the walk, Marcelina Kulikowska, who committed suicide at age 38 for not being able to realise her professional aspirations after putting so much effort towards the women’s rights movement.
For those interested in increasing their knowledge of how the fair sex has contributed to this beautiful city, there are still plenty of opportunities to do so. Below are some future events focusing on the role of women in Krakow, as well as reviews of those that have passed.

“Following in the footsteps of Krakow’s sisters of Virginia Woolf”
Przestrzeń Kobiet has recently teamed up with the organizers of the new exhibition at the International Cultural Centre, “British Bohemia. The Bloomsbury Circle of Virginia Woolf”, for another walking tour to take place on 9 October. When asked to give a sneak peak of the tour, Natalia Sarata of Przestrzeń Kobiet explained, “it will explore landmarks associated with women who, on the one hand, showed similarities to the women of the Bloomsbury circle in work, as writers, artists, and poets; and on the other, were active in the same historical atmosphere of the beginning of the 20th century and interwar years… Though there was also a Bohemian scene in Krakow, only the men who participated are well documented, while the women only appeared as mistresses or wives of the participating intellectuals.” This excursion seeks to bring them out of such shadows and highlight accomplishments like those of Dagny Przybyszewska, who is recognized more for her role as femme fatale than for her literary works, translations, and general contributions to the arts in Poland. The tour will end in the ICC with entrance to the Bloomsbury exhibition.

HERstory Workshop for educators and academics

At the end of this month, 30 September, those interested in learning more will have the opportunity to attend a free “HERstorical Workshop” on the landmarks and herstory (a term the organizers use frequently in place of history) of women from Krakow and the greater Małopolska region. For eight hours, the seminar run by Przestrzeń Kobiet will teach regional educators and academics studying women’s issues to reflect on the omission of women and their legacies from written history, to raise awareness of women’s contributions to democracy, and to strengthen a more balanced perspective in education throughout the region.*

Following the footsteps of Jewish women, emancipators, and other outstanding “Krakowianki”

Thanks to funding from Norway Grants (also behind the financing of the Sukiennice renovations and other projects in Poland for the next four years), the Krakowski Szlak Kobiet organized free walking tours that took place this past spring and summer. Each was focused thematically on one of three groups of Cracovian women: the Jewish, the emancipators, and those who fell into neither category, but offered outstanding contributions to the city. Two volumes documenting these heroines of Krakow and the landmarks associated with them have been compiled and released as guidebooks by Przestrzeń Kobiet. Maps of these tours are also available online and at the foundation. Though its activities so far have been conducted in Polish, the organization has said it will readily schedule tours in English (or German) upon interest. The mastermind behind the tours, Anna Kiesell, also arranges customised tours for groups of students, teachers, and city guides in all three languages.

One of the tours followed the footsteps of Krakow’s Jewish women to shed light on important figures and heroines, beginning in the Old Town and ending in the historic Jewish district of Kazimierz. Though the efforts of these Jewish women were instrumental to the history (or herstory) of the city, many have since been forgotten. This tour sought to highlight important places in the lives of Jewish females, such as the religious Orthodox educator, Sara Schenirer (pictured), who fought for and oversaw the opening of Beis Yaakov schools for women in Poland and throughout Europe, even earning her the title of “Mother of Israel”. Also featured were one of the first female professional photographers in Krakow, Amalia Krieger; poet Zuzanna Ginczanka, who began writing at age 10, was first published and recognized at age 17, and was killed by the Gestapo in 1944; Diana Reiter, one of the first females to work on architecture in Krakow and a member of the Jewish Engineers Association, who was portrayed in the film Schindler’s List and killed by the Gestapo in 1943; one of the rare women doctors of the time and also a social worker, Paulina Wasserberg, who took her own life on the way to execution in 1943; and track athlete Maryla Freiwald, amongst others.

Another walking tour focused on the activities and achievements of emancipators during the 19th and early 20th century in then revolutionary Krakow. Several women’s rights activists were discussed, such as Kazimierza Bujwidowa, who wrote several pamphlets on feminism, women’s equality, and their right to vote, and was also known for fighting illiteracy among adults and opening reading rooms for children; Marcelina Kulikowska, who started and taught at the first women’s high school in Krakow; Jadwiga Sikorska-Klemensiewiczowa, one of the first female students of the Jagiellonian University, who studied pharmacy and ran her own medicinal herb garden near Wieliczka; Maria Turzyma, who started and ran Nowe Słowo (1902-1907), a biweekly social-literary journal on women’s issues; and Władysława Habichtówna, who fought for the rights of Krakow postal workers and for a women’s housing cooperative to be built for working class women, which still exists today.

For those exceptional, though often overlooked, women of Krakow who fell neither into the emancipator nor Jewish genre, a walking tour was also held to remember their efforts, contributions, and the various ways in which they broke through social barriers during their lives. A perfect example to close this article is the beautiful actress, explorer and world traveler, Jadwiga Mrozowska-Toeplitz, who was considered the first woman to cross the “Roof of the World” and even had a strip of the Pamir Mountains named after herself in 1929. After her expeditions to India, Ceylon, Birma, Iran, Tibet, Kashmir, Kyrgyzstan and Tajikistan, she settled in Krakow where she took up art, learning languages, history, astronomy, and especially geography.

* Those interested in attending are asked to fill out an application (http://wartopamietac.info/wp-content/uploads/2010/09/WARSZTAT_HERSTORYCZNY_formularz.doc) and send it in to ewa.furgal@przestrzenkobiet.pl by 23 September.