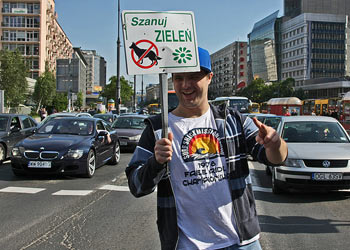 Beginning in Warsaw next week, marches for the legalisation of marijuana will take place every day throughout Poland over the span of two weeks. According to Gazeta Wyborcza, the marches will be perfectly legal as the organisers will submit their plans to the respective city hall three days before each planned event.

The protests, dubbed “hemp marches” by the Polish media, are being organised to draw attention to the issue of legalisation of marijuana. While the expected thousands of marchers taking to Warsaw’s streets will cause significant disruptions to traffic in the city, “Free Hemp” Initiative representative Jędrzej Sadowski told Gazeta, “we have no choice but to speak up for our cause”.

According to the organisers, legalisation advocators are fighting for their civil rights, which were illegally violated when President Bronisław Komorowski, then serving as the speaker of the Parliament, denied the formation of the “Free hemp” Legislative Committee.

In Poland, cannabis is classified as a hard drug and possession in any quantity is illegal, and punishable by up to three years of imprisonment. However, those caught in possession of minor amounts may have the choice of rehabilitation instead of jail time.

In addition to Warsaw, cities with planned marches include Bielsko-Biała, Częstochowa, Gdańsk, Lublin, Łodż, and Poznan.