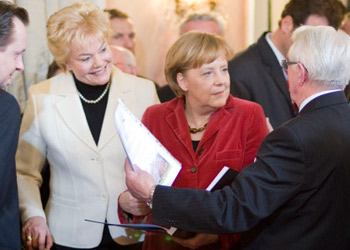 Erika Steinbach told a Christian Democrat Party meeting in Berlin that the Poles mobilised their army in March 1939 – six months before the Nazi invasion of 1 September that year. During a heated debate, Steinbach said: “I cannot help the fact that Poland started mobilisation as early as March 1939”.

She later claimed that her words were misinterpreted, and that she did not mean to question Germany’s responsibility for the war. Guido Westerwelle, the German foreign minister, condemned Steinbach’s claim, saying, “Ambiguous statements that call into question the heavy responsibility of Germany for the outbreak of World War Two are not acceptable”. Cornelia Pieper, the Deputy Foreign Minister, added that Steinbach’s comments were “dangerous”.

It has been German policy for some years to acknowledge responsibility for the start of the Second World War. Both Germany and Austria have strict anti-Nazi laws, and bosses at the Internet search engine Google have removed material that contravenes these laws from portals in both countries. In Germany last year, an artist narrowly escaped prosecution for creating a garden gnome performing a Nazi salute. Judges agreed not to prosecute, because they accepted that Ottmar Hoerl’s work was mocking the Nazis.

There has been no suggestion that Steinbach acted illegally by making her statement. However, it is not the first time she has sparked controversy. In 2008 she was criticised for appearing to put Germans displaced by the war on an equal footing with Poles and Jews. Steinbach has now said she will stand down from her post on Germany’s executive governing committee.

Evidence given by Alfred Naujocks at the Nuremberg Trials suggests that the war was the result of a series of planned operations by Nazi bosses, to give the impression that Germany was under threat by Poland. In all there were 21 operations, under the umbrella name Operation Himmler.

The best-known of these was the staged attack at the German radio station Sender Gleiwitz (now Gliwice, in Poland), near the Polish border, on 31 August 1939. The attack was in fact carried out under the orders of Gestapo boss Heinrich Muller, and was implemented by Germans – many of them prisoners – dressed in Polish military uniforms. Three days earlier a German spy had killed 20 people and wounded many more with a bomb at the railway station at Tarnów in southern Poland. The number of casualties could have been much higher, but a train from Krakow arrived eight minutes late.

Hitler used the Gleiwitz Incident as justification for his invasion of Poland on 1 September 1939, and plunged first Europe and then the world into war for six years.