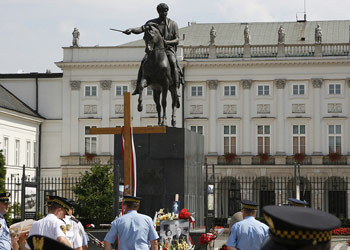 Family members of 28 of the victims of the 10 April plane crash that killed top government and military officials have proposed a pilgrimage to the crash site, as a form of mourning and remembrance of the dead. They have also proposed taking the memorial cross that’s currently in front of the Presidential Palace with them on the journey.

Today, exactly five months after the crash, First Lady Anna Komorowska announced her support for the pilgrimage and her desire to take part, stating publicly that the Chancellery of the President will help in its organisation. The tentative date for the pilgrimage has been set for 10 October, the six-month anniversary of the tragedy.

In a letter addressed to the first lady, those family members proposing the pilgrimage wrote that they “would like to complete that unfinished journey” to Katyn. The family members have also expressed a desire to thank the residents of Smolensk, who have been leaving flowers and candles at the site of the crash since April.

Meanwhile, the so-called “Defenders of the Cross” have planned their own pilgrimages, to the cross in Warsaw that’s at the centre of the controversy. The pilgrimages have begun in several cities around the country, and will conclude in front of the Presidential Palace, where the contentious cross continues to stand. The pilgrims hope to pressure the authorities into erecting a memorial to President Lech Kaczyński and the other victims of the plane crash.

Photo: Protesters and police gathered in front of the cross at the Presidential Palace on 3 August / photo by Clint Fowler