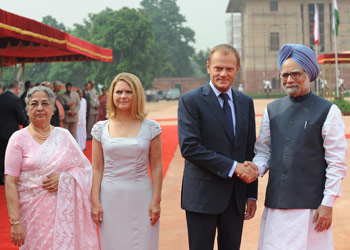 Prime Minister Donald Tusk has embarked on a five-day journey to India and Vietnam to promote Poland to Asian investors. The first leg of his trip takes place in India, marking the first time that a Polish head of state has visited the country in seven years.

During Tusk’s stay, leaders will continue high-level talks on mutual economic cooperation that began when the president of India visited Poland in 2009. PM Tusk took part in a Polish-Indian Investment Forum in Bangalore yesterday, where he presented investment opportunities to Indian business firms, specifically offers in the Małopolska region and Łódź.

Before meeting India’s leaders today, Tusk visited the Mahatma Gandhi mausoleum, where he laid a wreath to honour the political and spiritual leader of India’s independence movement. Then he went to meet the President of India Pratibha Devisingh Patil, Vice-President Mohammad Hamid Ansari, Minister of External Affairs Somanahalli Mallaiah Krishna, and the President of the Indian National Congress Party Sonia Gandhi, as well as the leader of the opposition Indian People’s Party Sushma Swaraj. Topics of discussion will include economic cooperation and investment in several sectors, including agriculture and the food industry, advanced technologies, defence, pharmaceuticals, and energy. Non-economic topics will be centred on mutual cooperation in the fields of culture and education as well as problems with European anti-terrorism.

A few days before Tusk’s trip, the Centre of Polish-Asian Studies began a campaign for the official posthumous honouring of the Maharaja of Nawanagar, Jam Saheb Digvijaysinhji, as a great benefactor and friend of Poland. The Maharaja helped house about 1,000 Polish orphans liberated from Siberian labour camps in the wake of the Sikorski-Maisky Pact of August 1941. The famous Polish pre-war singer Hanka Ordonówna also played an instrumental role in transporting the children to their new home next to the Maharaja’s palace, and wrote a book about it titled Wandering Children (Tułacze Dzieci).