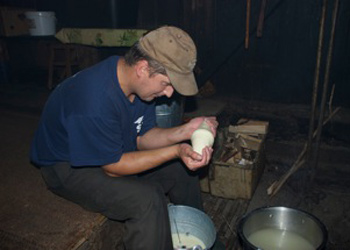 Poland’s agricultural produce is amazing in many ways, but one area that seems to be lagging behind is cheese. For a country with so many farmers, most of whom have a cow or two, this has always surprised me, but after a recent week spent travelling around Poland with a British academic, studying the culture of Polish cheesemaking, I’ve now got a much better idea of why things are as they are.

Firstly, a little about cheese. People have long tried to find ways of preserving protein. Particularly smaller farmers, who relied on their one or two cows for milk, and couldn’t afford to eat them. Pigs were a better source of protein; they grow relatively quickly and their meat can be made into a wide variety of products, but they are expensive to raise as they don’t eat grass or hay so you have to expend precious energy (and land) growing food for them. Cheese became an important means of preserving surplus milk and providing the farmer’s family with a source of protein in the winter months when the animals were dry. Over time, the art of drying out and maturing cheeses developed, which was particularly important in mountainous regions, where the shepherds would herd their animals up onto high pastures at the beginning of summer and only come back down to their villages at the beginning of autumn, bringing the milk that the animals had given over the course of the summer with them in the form of cheeses.

Given its humble origins and very short list of ingredients (milk, salt and rennet, which coagulates the milk and makes curd) it seems there’s no excuse for Polish cheese not to have advanced beyond the simple, fresh, almost tasteless white cheeses we see in supermarkets, shops and markets throughout Poland (I’m ignoring the yellow, plastic-like cheeses you see sweating in packaging or drying up in slices in every shop which I’m not convinced are of animal origin). There’s little to distinguish between Polish handmade cheeses, but the main difference seems to be whether the cheese is considered sweet or sour and an indication of how old it is (in this case, age is measured in hours). However you look at it, the range and quality of Poland’s cheeses is a long way from what you see in places like Italy, France or even the UK.

The missing ingredients are bacteria. A good cheesemaker is really a virtuoso in the management of bacteria. Describing how this biochemical miracle works would fill a whole library, but in short, a cheese that does any maturing at all, whether it’s cheddar, Rocquefort or Camembert, starts life as a vat of warm milk to which the cheesemaker adds the right type of bacteria. They are given time and warmth needed them to multiply and create the by-products that give cheese its flavour and texture. Nowadays, food hygiene laws mean that these “right” bacteria usually come in a packet sold by a specialist company, but not so long ago a cheesemaker could have added them consciously by adding a bit of whey from the previous day’s production, or unconsciously, by making the cheese in a wooden cheesemaking bucket that was rarely, if ever, washed.

So adding the right bacteria is key and is something that Polish cheesemakers, with a handful of exceptions, don’t do, relying instead on the bacteria that are naturally present in milk. We see the result everywhere: the familiar bland, fresh white cheese that goes sour pretty quickly. Some producers experiment by adding herbs and spices to the basic product. For example, in Korycin, near Białystok, and Wizajny near the Kaliningrad Oblast, members of the Korycin and Wizajny producers associations showed us how they add various flavourings like caraway, olives and basil to their cheeses. The finished cheeses don’t differ hugely from each other and neither type is a million miles away from the typical fresh, white Polish cheese you see everywhere. What’s interesting is that the recipes from both these places were introduced from abroad, in the case of Korycin by Swiss soldiers recuperating after fighting in the Swedish ‘Deluge’ in the 17th century, and it seems that originally both types of cheeses were matured. Over time this knowledge seems to have been lost and today the cheeses are sold very young. Both groups of producers travel around Poland to sell their cheeses at various fairs and festivals, and from time to time you can find them in Krakow too.

Closer to Krakow, we also visited Kazimerz Furczon, who makes traditional oscypek near Nowy Targ. Oscypek is made from the milk of the sheep that are taken up to the high Tatra pastures for the summer, and Kazek took us up to his idyllically located hut to see the cheese being made and then smoked over a fire. He told us of the threats to the future of oscypek, as farmers give up farming and sheep disappear from the Polish mountains. Oscypek is one of the few traditional Polish products with to be ‘Protected Designation of Origin’ status from the EU, and it’s relatively easy to get in Krakow, together with bundz and bryndza, by-products of the oscypek-making process. There’s a lot of imitation around though, so to be sure you’re getting the real thing and not something made purely from cow’s milk or in somebody’s backyard, ask to see his or her certificate or look for a PDO label on the packaging. An authentic producer won’t mind.

Finally, we visited two “real” cheesemakers – real in the sense that they make something that cheese lovers will recognize as real cheese. Unfortunately, these cheeses come from a tradition from outside of Poland, and unfortunately for Cracovians they’re at the other end of the country, but it’s an encouraging development. In the 1990s, Thomas and Claudia Notter moved from their native Switzerland to Bahanowo in the Masurian lakes area, where they now run an organic farm and make matured cheeses from milk from their own herd. We tried an 11-month-old Beaufort style cheese that was lovely. Next we visited Sylwia Szlandrowicz and Ruslan Kozynko at Rancho Frontiera in Sorkwity, about four hours’ drive north of Warsaw, who farm sheep and Jersey cows. Sylwia started making cheese about five years ago, having spent six months reading everything she could get her hands on, and they now make a variety of cheeses, including a hard, Parmesan style cheese as well as Frontiera Blue, a blue sheep milk cheese that is absolutely delicious. Ruslan travels around the country with the Rancho Frontiera cheeses, but both producers also accept Internet orders and can send you their produce by courier.

The availability of EU support should do a lot to encourage more Polish cheesemakers to take up the challenge and join the great cheese-making countries of the world, but when the Polish palate will be ready to move away from its beloved white cheese is another question.