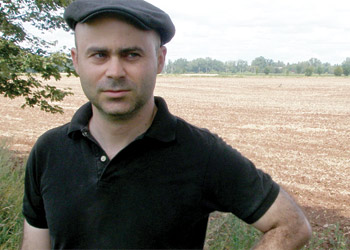 Anyone who writes a novel about an émigré count who journeys to Krakow on a quest to liberate his country from the shackles of its foreign oppressors, surely deserves honorary citizenship. And that’s exactly what Andrew Kozelka has done. The Krakow Messenger, set during the 1863 insurrection, is based on a thrilling legacy that echoes the freedom-fighting exploits of Stefan Bobrowski, Joseph Conrad’s very own uncle. The Krakow Messenger was one of five finalists for the Kirkus Review Literary Award and it was also short-listed for the Pirate’s Alley Faulkner Prize. You can track down a copy at Massolit Books, ul. Felicjanek 4.

KP: If you could live anywhere in Krakow, where would it be, and why?

AK: In the taller tower of St. Mary’s. Learning to trumpet by trial and error.

AK: I’d probably strut around awhile, checking myself out in big mirrors. Proclaim a few things. Close down shopping malls. Put my mug on stamps. Wait – did you say king or reactionary tyrant?

AK: A small but telling detail: the plastic pigeon baths I see in the parks. It says something about the people here.

AK: Well, the Main Market Square is not overrated, of course, but it’s changed a great deal. It feels a bit cluttered up with people like me and the venues of the monoculture.

AK: Not a Cracovian but he died in a field outside of town: the same Stefan Bobrowski [see intro], Chief-of-the-Town of the National Government for a short but crucial period of the insurrection. Maybe I’d also designate a “poets road” with statues of Krakow poets such as Szymborska to complement the Mickiewicz on the square.

AK: Something I notice when coming to Poland after travelling in other European countries is that here you can rely on friendliness and good service in the smallest bakeries, delis, etc. So I recommend to travellers buying something from one of these mom ‘n pop places and having a picnic by the river.

AK: The surest way to impoverish art is to base it directly on personal experience. The truth comes out in goodbyes. These are my Krakow koans.

AK: I go to the moon, like Master Twardowski. It’s a little bit cold there but the fishing is good.

AK: Writing books is a form of speaking through trees … unless they’re electronic books. Pierogi. (No connection intended.)