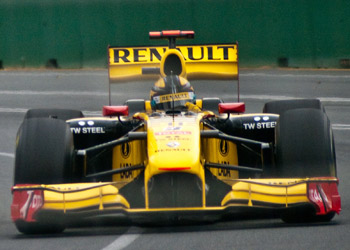 Before the Belgian Grand Prix, Polish F1 driver Robert Kubica was enjoying such a groundswell of enthusiasm from supporters that he found himself assuring the press that he was not going to win the race. He nevertheless showed thrilling form in the sometimes wet race, making effective use of Renault’s newly fitted “F-duct”, which allows cars to reach higher speeds on the straightaways.

The race was a wild one, and a crash between Jenson Button and Sebastian Vettel left the field wide open for their MacLaren and Red Bull teammates to compete for the top points. The narrow victory by Hamilton allowed him to edge out second place finisher Mark Webber for the leadership in the drivers’ championship.

With two of the favourites out, Kubica was able to capitalise on the technical improvements to the car and his own strong form.

The race was the second in a row to feature serious pit row incidents for Kubica’s crew. In Hungary before the mid-season break, the race took a serious wrong turn for Kubica when a tyre flew off Nico Rosberg’s car, bouncing through the pits and narrowly missing crew members. This distracted a Renault crew member, who let Kubica leave the pit at the wrong moment, allowing him to smash into Adrian Sutil, ending hopes of a finish in the points for both drivers.

In Spa, Kubica was fiddling with settings to prepare his car for rain tyres as he cruised into the pits, overshooting his spot and hitting a crew member with his front wing. The crew member went to the hospital for observation but was released later in the day.