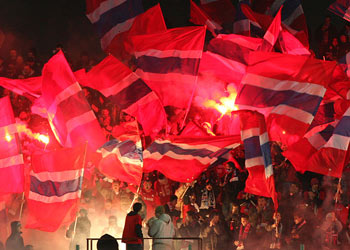 Polish football is plainly plagued by a long list of structural, organisational, financial, and corruption-related problems, all of which impact the quality of play on the nation’s pitches. The Polish Football Association (PZPN) is widely regarded as riddled with corruption, a viewpoint confirmed by continuing arrests related to a sprawling scandal, masterminded by a shadowy “football mafia” boss known in the press only as “the Barber”. Logistical problems are also common, and a Friday night match in Lublin in August was unable to resume as scheduled after the intermission when the pitch lighting went dark for nearly an hour. On top of these problems, there is the dismsl performance of the national side over the past two years, which speaks for itself.

Of all of these problems, none is more obvious than the persistent issue of violent hooliganism and the chilling effect it has on the development of the game throughout the country. As Poland prepares to host the 2012 European Championships, its ability to keep order at matches is being put to the test, and organisers and authorities alike are looking to new solutions to improve security and change the thug culture that permeates the crowds at Polish football matches.

While the situation surrounding football violence has improved from the deadly excesses of the 1990s and early 2000s, it remains so endemic in Poland’s most popular game that it is often viewed with resignation as an unavoidable function of the football itself. The atmosphere at some stadiums is so threatening that families are almost completely absent, and damage to facilities is not uncommon.

Attendees of the first round match of the Polish Cup in Bydgoszcz incontrovertibly illustrated the phenomenon of destructive fan behaviour, harming the very clubs that the “hools” purport to support, by demolishing their own stadium in a battle with police and rival fans on 27 August. Chairs and barricades were torn up to be used as weapons against one another and the 1,000 or so police officers, and the newly installed cameras were predictably targeted and destroyed. The damage was estimated at about 100,000 złoty (28,000 euro). The PZPN announced that the club, Zawisza Bydgoszcz, will play their next five home matches in front of the ruins of their own empty stands. In a livid statement in response to the riot, the board of the club condemned the fans and indicated that they may consider closing the club altogether.

A Nuanced Subculture of Crime and Fear

The firms are entrenched social institutions, and their relationships with one another and with their clubs are almost Byzantine in their complexity. Most of the clubs’ firms have networks of allegiances with one another, resulting in the bizarre phenomenon of matches during which supporters, rather than singing insults and threats at the visiting fans, exchange praise and pledges of eternal loyalty with them. Nevertheless, the pervasive aggressive atmosphere at some stadiums is so toxic that Krakow’s Cracovia, for example, has struggled to remain in the top league over the past few years as its powerful gang of hooligan “supporters” has created a powerfully negative atmosphere at its stadium, driving away potential families as it rallies its hooligan base.

They can also function as fairly sophisticated criminal organisations, demanding protection money from the clubs and using the stadiums as gang turf on which to conduct business such as trafficking drugs, as was reported at Lech Poznań in February, shortly before the club clinched the 2010 championship.

Reports on the subject of football-related crime by the national police service point to successes in enforcement and the statistical decline of crimes at football matches, and warn against hysterical efforts to sharpen penalties. Nevertheless, police and prosecutors have pushed for the implementation of new expedited court procedures, which are to streamline processes for perpetrators to be tried within 24 hours of their arrests. The Ministry of Justice hopes to use the express courts in conjunction with proposed clarifications to the law, which ban troublemakers for up to six years by quickly applying the bans and would enforce them with the threat of imprisonment for up to two years.

The stadium bans have proven difficult to enforce. As the event organisers are responsible for barring banned persons from entering matches, checking identification against printed records is extremely time consuming, leaving clubs fuming in frustration. As a result of the Bydgoszcz fiasco, Justice Minister Krzysztof Kwiatowski has offered a solution, proposing that offenders who are convicted of stadium crimes be fitted with ankle monitors like those used for house arrests. The system would monitor their whereabouts, allowing police and clubs to ensure that prohibited persons are not present at matches.

Problem Extends Beyond the Stadium

While enforcement of stadium bans may be one piece of the puzzle, the solution to the problem of football firms does not begin and end at the turnstiles. When the PZPN firmed up its policy of punishing clubs by closing their stands following serious incidents of disorder over the past decade, the firms, who have organised their own fighting “league”, began to use social media to organise massive brawls in hideaways within the national park network.

One of the most shocking Polish football riot incidents occurred not at a stadium at all, but near the University of Łódź in 2004, when a running battle between police forces and football hooligans encountered a large group of revellers taking part in the annual Juvenalia student festival. As the hooligans hurled bottles and rocks, the police mistakenly fired real bullets instead of rubber ones at the crowd of mixed students and rioters, killing two people. One, a young man, was reportedly active in the Łódź Widzew firm, and attended the match that night. The other, a 23-year-old woman, was a bystander visiting her boyfriend who was working at the student event. Furthermore, these deaths may have been preventable had the ambulances en route not been delayed by an attack by drunken hooligans, who threw rocks at them and attempted to overturn them.

Will New Venues Solve the Problem?

The fleet of new stadiums under construction for Euro 2012, along with those being modernised with EU funds, may go a long way toward ensuring safety for families and fans who come to see their club play rather than fight or die for it. The new Cracovia stadium’s impending inauguration has been accompanied by a pointed PR campaign by the organisation, making safety a major talking point. Other new venues are in the works in a dozen cities, but it remains to be seen whether they will impact the the underworld culture.

They may, if only by drawing middle class crowds who are unwilling to tolerate thuggish behaviour. Of course, if the stakeholders in Polish football are serious about doing that, they also need to address that long list of structural, organisational, financial, and corruption-related problems. And see to it that the play on the field is watchable.