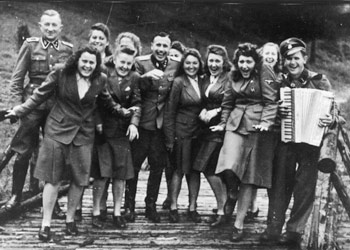 For victims of the Holocaust, there was no retreat from misery. But when the soldiers of the Third Reich finished for the day, they returned home to a model Germany complete with housewives and kindergarten.

We often see Holocaust history in terms of permanent exhibits and guided tours – as a closed book. In reality, news about the Holocaust is constantly breaking. Hitler’s campaign to extinguish the Jews generated a massive amount of documents, perhaps too much for a single generation of historians to tackle.

The story of a middle class society resting in the wake of the bloodiest military operation in human history is only one example of how newly available information is constantly changing our picture of the Third Reich’s occupation. Thousands of women volunteered to act as Hitler’s homemakers: packing up and moving into the newly conquered territories to settle and Aryanise the Reich’s frontier.

Erna Petri was one such housewife living in Poland. The young wife of an SS officer, Petri once found six Jewish children who had escaped from a railroad car bound for an extermination camp. A mother herself, she took the children home and fed them. Then she led them into the woods and shot each of them at point-blank.

Petri’s post-war trial inspired Wendy Lower, an American historian, to travel to archives across the former Soviet Union in search of records that would tell the story of German women living in the East. As she pieced together court testimony and city registers, she began uncovering the details of what she calls “genocidal societies” on the Eastern Front.

While the complicity of the Third Reich’s women at home had been explored, relatively little was known about women living in the occupied zones.

“We look at the East as a war zone, and therefore a male-only space of combat and mass shootings,” Lower said. “Not so much as this place where thousands of women, entire families were relocated.”

As many as half of the Jews were murdered outside of the camp system – in ghettos and in mass shootings – and probably not far from these families. For Lower, this raises the question of how women were involved. What did they witness, and how did they participate?

The truth may be impossible to recapture. After the war, it was easy for women to slip back into traditional roles. Family members were not legally required to incriminate one another. Ms. Petri’s very public trial was something of a rarity. In general, prosecutors were unable – or unwilling – to think of women as war criminals. For them, ignoring the guilt of women was a comforting return to the pre-war norm.

“Anyone is unsettled by the willingness and even eagerness of many people, including women, to participate in a national program of systematic murder,” explained Walter Reich, a psychiatrist and a former director of the U.S. Holocaust Museum.

Reich argues that even today, the emerging details of women’s involvement can compound the feelings of unease that come with learning about the Holocaust. However, he says museums ought to work to make the role of women more clear.

Easier said than done. The expanding pace of research presents problems for museums trying to stay current. And the main exhibit at the Auschwitz-Birkenau museum – which predates the fall of communism in Poland – is no exception.

According to spokesman Jarek Mensfeld, museum guides receive annual training, which includes a briefing on the latest research. But Mensfeld admits the museum misses an opportunity to explore the identities and personal lives of both prisoners and guards. He says the 50-year-old exhibit is scheduled to be replaced in the coming years.

“The new exhibition will take into account the background of the mass murder in Auschwitz, for example the ethnicisation and activities of the Einsatzgruppen,” said Mensfeld. “But the story, for natural reasons, focuses and will focus on what happened in Auschwitz directly.”

So as more is revealed about what happened outside of the camp’s walls, visitors may seek history outside of the museum with increasing frequency. According to Lower, the Eastern European history of the Holocaust is only beginning to be explored – there is much to be learned about the Jewish Poland that has now mostly disappeared. But if this is the future of Holocaust history, it may clash with a Polish society trying to find its own future.

“Seeing the Holocaust within the realm of a closed camp – like a Birkenau or a Monowitz – and then leaving that camp and taking the bus back to Krakow, and being in Poland” can create a dual reality, muses Lower. “You go into the camp and it’s a time warp, it’s an experience unto itself. You come out of those spaces and you’re suddenly confronted with contemporary life and Polish society.”

While Lower agrees visits to smaller localities can fill a gap in Holocaust education outside the scope of museums, she is concerned about the conflicts that might arise when amateur historians are insensitive to the lives of local inhabitants.

“I think it’s not simply a matter of showing up and knocking on somebody’s door,” Lower warned. “Once you move out of the camp system, you should be aware this is part of local history.”