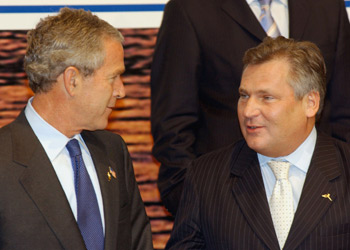 At the end of July 2010 the Polish Office of Border Security gave a number of recently-released documents to the Poland-based Helsinki Foundation for Human Rights (HFHR), which for the first time provided details of transported passengers, including possible terrorism suspects, on seven of the CIA flights to a secret prison in Poland between December 2002 and September 2003.

On 9 August the Polish daily newspaper Gazeta Wyborcza published an interview with the head of the legal division of the HFHR, Adam Bodnar. The journalist asked if Polish prosecutors are considering charging the highest ranked officials for the secret prisons that they allegedly allowed the CIA to set up in Poland when the War on Terror was at its height. These include former President Aleksander Kwaśniewski, former Prime Minister Leszek Miller, ex-Minister of the Interior and Administration Krzysztof Janik, and Zbigniew Siemiatkowski, the former head of the Polish Intelligence Agency.

Adam Bodnar, secretary of the management of the Helsinki Foundation for Human Rights, said, “We can only guess what evidence the prosecution may have, as the investigation is fully classified. The crime could consist of handing over part of our territory to American jurisdiction, and creating an ex-territorial base and allowing the possibility that people could illegally be deprived of freedom and perhaps even tortured.”

The prosecutor’s office may lay charges in front of the State Tribunal of War Crimes against former President Aleksander Kwaśniewski and former Prime Minister Leszek Miller. Mr. Kwaśniewski told Gazeta Wyborcza that Poland co-operated with the American Central Intelligence Agency but he absolutely denies that there were secret prisons in Poland. “There was no prison,” he said. “I don’t have any information about the Americans torturing prisoners in Poland.”

Another former minister in Mr. Miller’s Cabinet, Tadeusz Iwiński, denied on TOK FM radio that he had ever admitted that CIA prisons existed in Poland, even though he had earlier told the press that the CIA did run a detention centre in Kiejkuty, and that people from countries such as Afghanistan or Morocco had been brought to Poland.

Although the Polish as well as the Romanian governments denied claims that the CIA held terrorists in secret prisons in their countries during the Bush Administration, Dick Marty, representative of the Council of Europe, concluded in a report in June 2007, based on research and interviews with over 30 current and former members of the intelligence services in Europe and U.S., that “he had enough evidence to state that secret detention facilities run by the CIA did exist in Europe from 2003 to 2005, in particular in Poland and Romania”.

An investigation into the affair had been open since 2008, when in September a Polish intelligence official confirmed that the CIA had held terror suspects inside a military intelligence training centre in Stare Kiejkuty in northeastern Poland. And although both President Kwaśniewski and Prime Minister Miller knew of its existence, it was unlikely they were aware that prisoners were being tortured because only the CIA had access to the prison.

Currently it is only known when and how many times CIA planes landed in Poland. Recently the information from the Border Guard Office became even more significant, because it included confirmations that the first N63MU flew into Poland on 5 December 2002, and the last on 22 September 2003. They also provide details of the number of passengers on seven flights to Szymany Airport.

The first plane in December 2002 carried eight passengers, the second in February 2003 carried seven, of which four were flown to an unknown destination, and the last plane, in September 2003, was empty on arrival, but was then used to fly five passengers to Romania.

Adam Bodnar stated that they suspect that this occurred because the CIA prison in Poland was liquidated and later recreated in Romania, and then in Lithuania, but there is no strong evidence of what happened to the passengers of these flights in Poland. The one thing we know from the Szymany Airport staff is that these planes were handled with the use of special procedures. At the moment, there is no evidence to prove whether or not Polish officers assisted the Americans, but the arrival of the CIA planes can no longer be denied by politicians.

What is new for this case is that, in a report published 17 August 2010, the AP informed that in 2007 one of the agency staffers discovered a box under a desk in the CIA’s Counterterrorism Centre with tapes of Ramzi Binalshibh, who has been described as one of the “key plot facilitators” in the September 11th attacks.

Two videotapes and one audiotape depicting Binalshibh’s interrogation sessions at a Moroccan facility the CIA used in 2002, are believed to be the only existing recordings made within the clandestine prison system. “If those tapes exist, they would be extremely relevant,” said Thomas A. Durkin, Binalshibh’s civilian lawyer.

Another 92 videos of two other al-Qaeda operatives, Abu Zubaydah and Abu al-Nashiri, were allegedly destroyed by the CIA, with the hope of wiping away all of the agency’s interrogation footage.

Current as well as former U.S. officials deny that there were any harsh methods like waterboarding used in Morocco. “The tapes record a guy sitting in a room just answering questions,” said an anonymous U.S. official familiar with the program.

“Today’s report is a stark reminder of how much information the government is still withholding about the Bush Administration’s interrogation policies,” said Alexander Abdo, staff attorney with the ACLU National Security Project.

One thought on “Shedding Light on Black Sites”