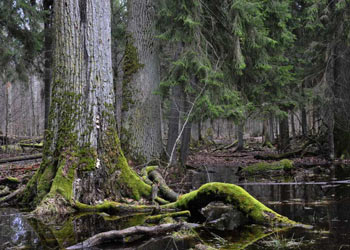 Long, long ago, forests spanned the entirety of the European Plain, stretching from Russia far into Central Europe. These ancient woodlands teemed with life for thousands of square kilometres on end. Then slowly, as the nomadic ancestors of the Slavs began to settle and the inhabitants of the area built defensive fortresses and established kingdoms, the forests shrank and human settlements expanded. Today, the only remaining tract of these primeval forests straddles the border of Poland and Belarus in a 41/59 percent split, respectively.

As the last old-growth forest in lowland Europe, a small section of Poland’s Białowieża Forest was made into a National Park preserve and added to the list of UNESCO World Heritage Sites in 1979. Belarus did not create a national park on its area of the forest until 1991, but when it did, it included the entirety of the remaining forest within park borders and was added as a cross-border UNESCO World Heritage Site a year later. To the frustration of environmentalists everywhere, currently less than 20 percent of the amount of forest located in Poland is protected by national park status. It can be traversed on foot in just a few hours. The rest is susceptible to commercial logging, with about 120 thousand cubic metres cleared annually for sale on the timber market. Thus begins the debate on the fate of the Białowieża Forest.

Since the mid-1990s, the government ministry in charge of environmental protection has tried to expand the national park designation to unprotected tracts of forest. Ironically enough, their efforts have been thwarted by the Polish Law on the Protection of Nature, which states that in order to expand or create a new national park, the surrounding communities of the area must acquiesce. The local governments surrounding the Białowieża Forest, namely Hajnówka, Białowieża, and Narewka, refused an offer last year to expand the park by 50 percent in exchange for 100 million złoty.

Spokesman for Greenpeace in Poland, Jacek Winiarski, told the Post that “many locals, especially those working for the timber industry, are afraid of losing their jobs. Our argument is that expanding the park would easily create 400 new jobs in the area, which is about the same amount as those that would be lost. But this does not guarantee that those jobs would go to the same people, and especially workers who are in their 50s are not adaptable to such a change of lifestyle and career… They [also] seem to be scared of no longer being able to use the forest for picking firewood, berries or mushrooms if it becomes a national park, but Greenpeace has tried to explain that we only seek to limit timber harvesting to the amount needed for local consumption, 30-40 thousand cubic metres annually.”

“The natural and cultural value of the Białowieźa Forest is being converted by the State Forests into cubic metres of timber harvested. It’s equivalent to selling the Wawel Castle for the cost of the dismantled stones and bricks. This is why we urge companies and the timber industry as a whole to stop buying wood from the forest administration,” Robert Cyglicski, director of Greenpeace in Poland, has stated.

The new Minister of the Environment, Andrzej Kraszewski, recently walked away from a long and arduous set of negotiations with only a 35 percent increase in park grounds in exchange for 75 million złoty to be given to the local governments. Winiarski says, “The problem is, according to experts and scientists, that this is not enough to preserve the natural state of the forest. The proposal was to start with this 35 percent and then work to expand it more in the future. But because the localities were very much against any expansion in the first place, we do not believe that there will be another opportunity to expand upon this 35 percent that would result in success given their attitudes in the last negotiations.”

So what now? An initiative called TyDecydujesz (YouDecide) has started to gather signatures in order to change the Law on the Protection of Nature. In the opening video on the website, Adam Wajrak, journalist for Gazeta Wyborcza, states that though at first glance it may seem fair that the surrounding communities should have a say in the land adjacent to them, it is unfair and even immoral to place such restrictions on a national treasure that should belong to all Poles. The group has 90 days to gather the 100,000 signatures needed to loosen national park restrictions.

Meanwhile, Greenpeace has been working on another angle as well. Along with a coalition of environmental NGOs, they recently appealed to the European Commission on the grounds that the State Forest National Forest Holding (NFH) in Białystok has been violating both the EU Birds Directive and the Habitats Directive, which together form the cornerstones of Europe’s nature conservation policy. The State Forest NFH has already had its certification for responsible forest management revoked by the Forest Stewardship Council for harvesting trees that were several hundred years old and engaging in what Greenpeace calls a “scandalous and nontransparent” FSC verification process. At a minimum, Greenpeace hopes to stop all logging during bird mating and breeding season, but a real victory would be the inclusion of the entire remaining forest into the protected National Park.