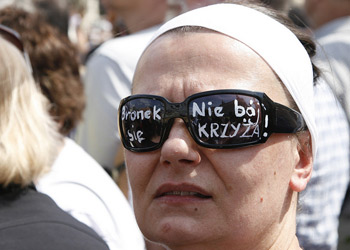 Crosses in Poland are rather like heavy suitcases: easy to put down, but psychologically much harder to pick up and move again. Carpenters have to be extremely careful: accidentally nail two pieces of wood together in the rough form of a crucifix and you’re pretty much stuck with it – you just have to build the rest of whatever it is you’re building around the thing. I’m exaggerating, but only slightly. Poland’s perpetually recurring problem with stubborn, hard-to-remove crosses is bewildering to the outsider, but actually makes perfect sense in the context of this country’s recent history. The ongoing circus outside the Presidential Palace has a string of distinguished precedents.

Earlier this year an attempt was made to erect a six-metre tall cross on Krakow’s Błonia Common, without planning permission. Last year there was a huge stink in Stalowa Wola when a similarly gargantuan example was placed on the site of a proposed church, again without planning permission. The most famous example of crucifix tribulation in Poland’s post-communist history was the so-called War of the Crosses centred on the Nazi concentration camp at Auschwitz. In 1998, activists erected 152 additional crosses around a large cross that commemorated a mass given by Pope John Paul II on the site in 1979. The presence of the original cross within the grounds of Auschwitz had long been controversial and it was the suggestion that it might finally be removed that sparked the war. Opponents and supporters were bussed or flown in from across the globe and plans were laid to erect 1,000 new crosses; one for every year Poland had been a Catholic state. The authorities, who could see this was logically headed towards the whole of southern Poland being forested with mini-crucifixes, eventually stepped in and cleared the site, but left the big one in place.

Of course the critical phrase here is “post-communist history”. The profound importance of the Catholic Church, and the cross, to ordinary Poles who opposed the communist regime is well documented and understood. In a recent article former president and Solidarity hero Lech Wałęsa recalled protesters laying out a cross of flowers on Warsaw’s Castle Square, and the security forces sweeping it away at night. Perhaps the most famous commie-busting cross was right here in Krakow’s Nowa Huta district. Erected as early as 1956 on the promised site of a church, which was never built, the Nowa Huta cross became the focus of some of the most serious civil unrest of the period when it was threatened with removal. In April 1960 Nowa Huta was sealed by paramilitary units and there were days of riots. The cross survived, and was even sneakily replaced by a new one in the 1970s when the guards were away necking vodka during May Day celebrations. For millions of Poles, whether they were there or not, the cross is as instantly recognisable as a symbol of political protest as it is of Catholic devotion.

Among the less sophisticated and less media-savvy representatives of today’s defenders of the Warsaw cross, dark hints are made that Jewish left-wing conspirators are behind attempts to have the symbol removed – in their minds the same people who tore down their crosses in the dark days of the 70s and 80s are up to their tricks again; it’s not rocket carpentry. According to a Jewish left-wing conspirator I had lunch with the other day, this may be their undoing. His dark hints were in the direction that the government may be allowing the hysterics to whip themselves into ever more absurd rhetorical extremities rather than getting the whole thing over with in a swift police action. How long can the Defenders of the Cross keep up the protest before they lose all political credibility?

One thought on “Perspectives on Poland: How to Move a Cross”