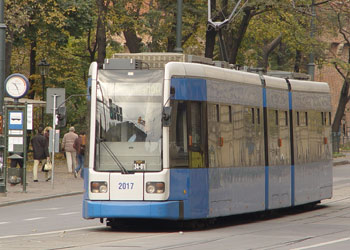 The crossing at Długa and Basztowa seems to be knocking trams off their tracks, according to a Gazeta Krakowska article published online yesterday. The fiasco caused traffic delays of over an hour on Monday morning as other trams approaching the intersection were stopped at the sight of a derailed tram, number 73. Angry Cracovians cite that this is the third such incident since the long and expensive repaving of the street was finished, costing the city 21 million złoty.

The first derailing happened to an empty tram on 22 August, causing it to knock down several steel street posts, damage a stretch of the road, and scratch a nearby car. The speed of trams coming around the turn from Teatr Bagatela was slowed to 8-10 km/h, but it happened again. Luckily, no one onboard was hurt either the second or third time. Baffled, the municipal transit agency, MPK, has asked researchers at the Krakow University of Technology to find the cause of the accidents and expects to hear back from them this week. Until then, trams will continue to run along Długa, hopefully without further incident.

Apparently, this is not the only problem cited since the celebratory re-opening of Długa on 12 August. The firm responsible for the modernisation of the street, Mota-Engil Polska, has been asked to fix the spacing of the steel poles on the sidewalks, the height of the curbs, and the poorly constructed pedestrian pavements. It has also assured the city that it will fix the tracks, if the problem is found to be with their renovation work.