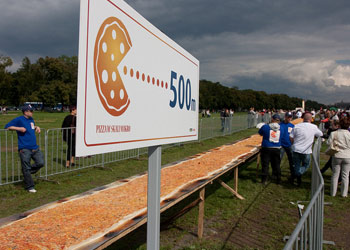 Hold the zapiekanki – Krakow has just added a world record-breaking pizza to its menu of delicacies.

The world-beating pizza was created at Błonia Commons on Sunday, by chefs from Pizzeria Magillo. They used three and a half tonnes of flour, 1,500 litres of tomato sauce and 1,600 kilos of mozzarella cheese to make the 1,100-metre dish – smashing the record of 405 metres set in Tuscany three years ago.

The masterpiece may have beaten the Italians at their own game, but the end result didn’t last long. As soon as it had been measured and approved by Guinness World Record officials, the pizza was sliced up and served to revellers.

Collections organised on the day raised money for the charity Aktogo, which supports children with brain injuries.

One thought on “World-Record Pizza Created in Krakow”