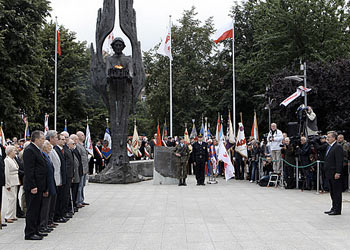 The 30 year anniversary of the Solidarity movement will mark a symbolic return to the Baltic birthplace of the peaceful Polish revolution that eventually saw the end of Soviet communism. In late August of 1980, the strikes that for two weeks spanned across the entire country, beginning in the shipyards on the Baltic coast and spreading to steelworks, mines, and various factories across Poland, ended with an agreement signed by the government authorities on 3 September promising the release of political prisoners, freedom of speech, and the formation of an independent trade union, later known as NSZZ Solidarność. At the height of its popularity, membership included about one in every four Poles; it was the first time that workers, religious leaders, intellectuals, agricultural workers, and students came together en masse under the umbrella of one organization against the communist regime.

On 14 August, 300 photos spanning over 50 billboards popped up in Gdańsk in a photo exhibition called “The road of Solidarity 1980-2010” to commemorate the day the shipyard workers began their strike 30 years ago. It will remain on display until the end of November.

Yesterday, 29 August, official festivities began in the Baltic city of Szczecin at the Plac Solidarności to celebrate the signing of the Szczecin agreements at 10:00 am with speeches by President Bronisław Komorowski, current leader of the Solidarity Trade Union Janusz Sniadek, and Mayor of Szczecin Piotr Kszystek. President Komorowski noted the need for the trade union to continue its tradition of open dialogue with the government and said that it was worth participating in the Solidarity movement, “worth taking part in the activities of Solidarity, worth taking the risk, not for yourself, but for Poland”.

Notably, Lech Wałęsa, the first leader of the Solidarity movement and first elected president of Poland, was not in attendance and issued a statement explaining his absence on his online portal, saying, “after 30 years of great personal effort, I am now horribly tired. That is why I am not in good enough condition to personally participate in many meetings and celebrations… I apologise to all those who do not like this attitude… Please do not say that I am being haughty or disrespecting anyone. In this state of affairs, I would finally just like to have some peace.” He has been known to be at odds with the current Solidarity leadership, especially in their support of the conservative Law and Justice (PiS) party.

The celebration moved from Szczecin to the tri-city of Gdańsk, Gdynia and Sopot, where the movement is said to have begun at the Baltic shipyards. On 29-30 August in Sopot, an international conference on the experience of the Solidarity movement called “Partnership in Social Policy – Theory and Practical Experience” included guest appearances by Jerzy Buzek, the current president of the European Parliament, Emilio Gabaglio, former Secretary General of the European Trade Union Confederation, and Georgios Dassis, the leader of the European Economic and Social Committee. In Gdynia on 30 August, the 24th National Congress of Solidarity Delegates met with about 2,500 invited participants, among them President Komorowski, Jerzy Buzek, and Jarosław Kaczyński, who are supposed to read a letter written by Barack Obama to the Solidarity trade union for the occasion. In the evening a musical concert, which will also be aired on TVP 1, will include performances by the pop star Kayah, Sebastian Karpiel-Bułecka of the folk-rock group Zakopower, the late ’90s rock band Bracia, Krakow-based singer, songwriter and poet Grzegorz Turnau, jazz and pop musician Stanisław Sojka, Antonina Krzysztoń, who was known to perform at opposition gatherings in the 1980s, as well as Mariusz Lubomski, acoustic singer songwriter, among others.

But the celebration would not be complete without a return to the historically significant Gdańsk shipyards, where the strikes that made the Solidarity movement possible began. And so on 31 August at 9 pm at the shipyards, a multi-faceted performance called “‘Solidarność’ – Twój Anioł wolność ma na imię” (“’Solidarity’ – Your Angel is called freedom”), directed by the American avant-garde visionary and stage director Robert Wilson, promises to be the highlight of the anniversary celebrations. Each act will be introduced with either poetry, monologue, or artistic commentary and interspersed with musical performances following the play’s themes by artists such as Marianne Faithfull, Macy Gray, Rufus Wainwright, and Phillip Glass. The four act play follows different phases of the creation of the Solidarity movement, honoring the memory of its leaders in the following sequence: Act I -“The Fight”, with Father Jerzy Popiełuszko demonstrating the meaning of martyrdom; Act II -“Injustice”, focused on Anna Walentynowicz and the women of Solidarity; Act III – “Peace”, which shows the universality of the Polish experience with the appointment of Pope John Paul II; and Act IV – “Justice”, with Lech Wałęsa leading the country to political freedom. A pyrotechnic display will accompany the play narration and a fireworks show spanning about a kilometre, complete with air acrobatics and orchestrated by the French Groupe F (who are renowned for their performances at FIFA, Olympic Games, and other international ceremonies), will mark the grand finale of the night.

On 3 September the anniversary celebrations will end, commemorating the signing of the Jastrzębie agreements at Jastrzębie Zdrój.