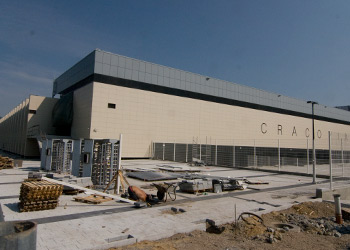 If you’ve gone by the Błonia Commons any time in the past year, you might have noticed the massive construction site located where the Cracovia Stadium once stood. If you’ve managed to pass by in the last month, you would have already caught a glimpse of the chic, modern new stadium, which is scheduled to open its field at the end of next month. To see the completed interior of the new building, fans will have to wait another year.

The sleek design is the result of a consortium of Spanish and Polish design firms, Estudio Lamela and Sener Ingeniera y Sistemas, and the price tag for the whole project is upwards of 150 million złoty. The new building includes underground parking, lit benches and green space outside, plenty of snack bars and restrooms throughout, a special section for handicap seating, and a field of natural grass. It will also house seven retail spaces, all with their own street-side entrances in which cafes, stores, and other commercial enterprises will set up shop. A two-story Club Restaurant is located on the corner of ul. Focha and ul. Kałuży and includes a panoramic view of the field from the main dining hall on the first floor.

The row spacing has been designed so that all the seats are covered and no seat is more than 90 metres from the central point of the field, which is considered the farthest distance for optimal football game viewing. The stadium will hold a total of 15,016 spectators; 13,800 seats designated for Cracovia fans, about 1,000 for fans of the opposing team (which is apparently 300 more than the required 5 percent), plus about 100 seats for members of the press, and of course, posh VIP lounges and sky boxes for the elite.

If you’re not a football fan, you might still have your chance to visit the stadium the next time a big concert comes to town. A special stage can be assembled over the bottom 11 rows of the west seating area, which can be expanded towards the turf and will remain under roof cover for just such occasions.

The stadium of the oldest club team in Poland has occupied the same plot of land since 1912. In 1936 it was named after Polish Marshall Józefa Piłsudski, who attended games in the stadium on two separate occasions, in 1917 and 1921. At the end of the 1940s, it was stripped of all other names and became known simply as the Cracovia Stadium. Having survived a great flood in 1925, the stadium burned to the ground in 1963. In 1966, the structure was reconstructed to also include a race track and stood in place as such until last year. The football team’s most famous fan is probably Pope John Paul II, who met with his “beloved Cracovia” team twice, in 1996 and before his death in 2005.