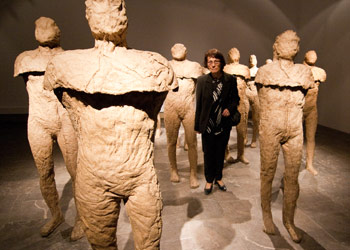 With the reopening of the Gallery of 19th Century Polish Art in the Cloth Hall scheduled for September, the National Museum still has plenty of muscle on show to round off August, with the tail end of an exhibition devoted to Polish artist Magdalena Abakanowicz (b. 1930).

“The works of an artist like Abakanowicz do not sit easily in the museum structure,” states Dominik Kuryłek, curator of the retrospective exhibition.

The creation of a proper habitat for Abakanowicz’s disturbing creations has been a big challenge for the staff, who decided to set the exhibition in the spacious ground flour of the main branch of the National Museum.

Entering the museum, visitors immediately feel trapped in a dusty, damp-smelling maze inhabited by imposing totems such as the fabric-made “Round Abakan” (1967) loaned from the National Museum in Wrocław.

This strange object, which hangs from the ceiling, looks like the corpse of a Hungarian Puli, the so-called corded-dog, and it is one of the finest examples of her soft sculptures, known as “Abakans” (after her family name), which hit it big in the mid-60s.

Abakanowicz’s creative use of fabrics such as the tough fibre derived from sisal (a member of the agave family) prefigured in some way the return to basic materials encouraged by Joseph Beuys and the Italian “Arte Povera” style at the turn of the decade.

The Abakanowicz sculpture Ruin (1993), made from a partially human-shaped branch dressed like an ancient idol, is a good way to experience the Freudian feeling of “the uncanny”. Her works leave us with the impression of being familiar yet foreign at the same time.

Such a disturbing effect is sometimes reached through a process of hybridisation, such as is the case of the three airplane-shaped aluminium “birds” greeting the visitor from their pedestal at the entrance of the building.

Though born from her imagination, most of the imposing sculptures displayed in Krakow seem to act as powerful symbols of an ancestral culture that has never existed.

This sense of ambiguous familiarity is even more evident when she embraces the human figure. In the central room of the museum 26 unshaped silhouettes made from stiff canvas sit with their wrinkled back towards us, later revealing their “uncloseness” to the visitor circling the installation.

Nevertheless, Abakanowicz’s figures of undefined gender aligned in Back (1976) and Reheaded (1998) are never sexually ambiguous. They seem rather to evoke the imperfect and unfinished bodies of man prior to the ultimate creation of Adam – they are beings that are still waiting to find a proper place and shape to live in the world.

Meanwhile, the karesansui-like zen rock garden of Embriology (1978-80), illuminated by a baroque light and made from oval “stones” stitched and stuffed with textile, is maybe the best example on display of Abakanowicz’s talent to give a concrete but unshaped form to the products of her imagination.

One thought on “The Uncanny World of Magdalena Abakanowicz”