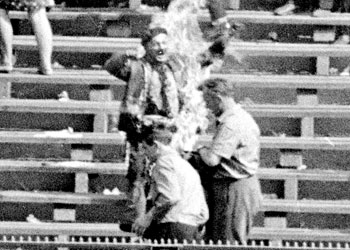 On 21 August 1968, following the “Prague Spring” cultural liberalisation program in Czechoslovakia, five countries of the Soviet-led Warsaw Pact invaded the country and brought an end to reforms and a return to harsh censorship. Poland’s armed forces participated in the invasion, which led to the deaths of 72 Czechs and Slovaks and hundreds of wounded.

In Poland, the invasion was viewed negatively by most, but the strict communist authorities made formal protests of the attack impossible. However, individual protests did take place, including one of the most bold acts, that of Polish dissident Ryszard Siwiec, whose form of dissent was to commit suicide by setting himself on fire. On 8 September 1968, the former Home Army soldier poured gasoline on himself and ignited in front of over 100,000 people in Warsaw’s 10th-Anniversary Stadium during a festival. He died from his burns in hospital. Siwiec’s act was quickly covered up by the communist authorities, in an attempt to erase it from public memory.

This weekend, a monument to Siwiec was unveiled in front of Prague‘s Institute for the Study of Totalitarian Regimes in a ceremony attended by both Czech and Polish dignitaries, as well as scouts from both nations.

Siwiec’s act is often overshadowed by that of Jan Palach, a Czech student who also committed suicide by setting himself on fire on Wenceslas Square in Prague on 16 January 1969. Authorities from the Institute for the Study of Totalitarian Regimes hope that the memorial for Siwiec will inform a wider audience of the Pole’s sacrifice.