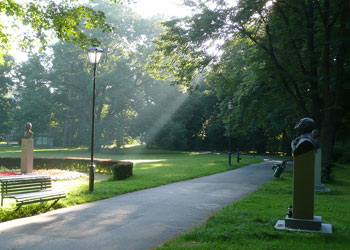 If permission is granted, busts of the late President Lech Kaczyński, Ryszard Kaczorowski, Poland’s last president-in-exile, Solidarity hero Anna Walentynowicz, and General Bishop Tadeusz Płoski, the clerical head of Poland’s armed forces, would stand alongside those of 39 other Poles already commemorated in the park. They include religious figures such as Pope John Paul II and Father Jerzy Popiełuszko, and other national heroes like Adam Mickiewicz, Marie Skłodowska-Curie, and
Tadeusz Kościuszko.

The newest additions to Park Jordana’s memorial busts include St. Maksymilian Maria Kolbe, a Polish friar who died at Auschwitz, and Countess Karolina Lanckorońska, a WWII resistance fighter. A 40th bust, that of priest Zdzislaw Peszkowski, will be revealed 17 September.

If approved, at least two of the busts may be unveiled on 10 April 2011, the first anniversary of the Smolensk tragedy.