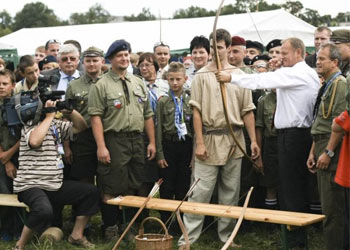 If you’ve walked the streets of Krakow in the past few days, you couldn’t help but see at least one of the 10,000 visiting scouts and guides or even entire troops of them marching, singing, and enjoying the city. That is because Krakow is hosting a Holiday of Scouting for the Polish Scouting and Guiding Association (Związek Harcerstwa Polskiego, ZHP) until 24 August, celebrating 100 years of boy scouts and girl guides in Poland.

Polish Scout troops from all over the country have literally set up camp in a tent city on the Błonia Commons, complete with miniatures of the Floriańska Gate and the Sukiennice. The ceremonies opened this past Tuesday with a speech made by Prime Minister Donald Tusk on the Krakow Main Square, in which he commended the Polish youth for the roles they have played and continue to play in Polish society, from the times of war to the recent help offered during the floods. He pondered, “How much better, more beautiful would the world be, if we all and for always would remain scouts.”

During the remainder of their stay in Krakow, the scouts will be busy attending lectures and discussions, concerts, and workshops organized in the Maly Rynek, such as pottery-making, blacksmithing, wickerwork, and carpentry. The organizers have even arranged for various competitions between scout troops. If you find yourself somewhere near the Wisla River this Sunday, 22 August, you might catch a glimpse of their dragon boat races.