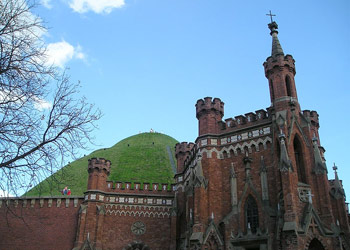 The Kosciuszko Mound in Krakow is facing hard times, and its administrators warn that without government support for needed reinforcement after the heavy rains of the year, it may have to close. The weather has not only damaged the structure of the mound, but is also being blamed for keeping much-needed tourism down.

Starting last year, with the financial crisis and continuing this year, the number of annual visitors to the mound has significantly dropped. The administrators of the monument had previously been able to pay for general maintenance expenses, such as mowing, snow sweeping, lighting, and staffing, with profit from visitor fares. Now with flood damage threatening the construction of the monument, the mayor’s office has asked the Ministry of Internal Affairs and Administration for 500,000 złoty from funds that are being allocated to areas across Poland affected by this year’s floods.

Marcin Kandafer, a spokesman from the mayor’s office, stated that the first instalment of flood damage funds received was spent in its entirety on road repair. He is counting on a second instalment, which, he promised, would include an allocation of the needed amount to secure the construction of the mound. The problem lies in the fact that there is still no guarantee that a second instalment of funding will reach Krakow. But there is hope yet, according to Prof. Bogusław Krasnowolski, vice-chairman of the Social Committee for Restoration of Monuments of Krakow. He says the committee will not sit by idly as the mound deteriorates. After evaluating its budget for investments this month, he hopes there will be a way to transfer at least part of the needed amount to the mound administration this year, with larger sums more likely to be available next year.

The Kosciuszko Mound is situated in the Salwator district and has served as a memorial to the Polish national hero, General Tadeusz Kosciuszko, since the early 19th century. Kosciuszko is best known in Poland for leading an uprising against Imperial Russia and the Kingdom of Prussia during the partition of Poland and in the United States for his role as colonel in the American Revolution. The Hapsburg era fortress that was erected at the mound now serves as a hotel, radio station headquarters, and houses permanent exhibitions on the life of Kosciuszko and history of the mound, as well as a wax museum displaying figures of Polish heros and freedom fighters. It is probably best known for its amazing panoramic view of the city and surrounding area.