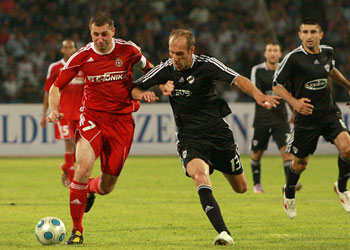 Baku, on a balmy night in August, is probably not the place where Wisła Krakow would have envisaged being dumped out of the Europa Cup (the erstwhile
UEFA Cup), but at the first time of asking that’s what happened last Thursday evening, by European minnows Karrabach.

Coming into the match trailing 1-0 from the first leg, a match Wisła were fortunate not to have lost on home turf by an even wider margin, Wisła could have been under no illusions about the size of the task ahead, and they entered the 25,000 all-seater stadium to a chorus of boos, a partisan and very vocal home crowd making that task even harder.

Combined with the humidity and heat – the match took place in the evening, but temperatures were still a sweaty 28 degrees – they had plenty of work to do if they were to progress to the second round.

They began the match looking determined, dominating possession and pressing forward for the opening 20 minutes, but they could only muster one tame shot across goal from Zurawski, which went out for a throw-in. Playing on the counter attack, Karrabach looked dangerous however, and on the half hour they got the break through, as the tricky left winger Rauf Aliyev floated in a cross that was buried by Afran Ismayilov.

Wisla were rattled, and they were suddenly struggling to get the ball out of their own half, realising they needed to score three goals to win the tie. Within minutes they were two down, as this time Aliyev himself broke and thumped a left foot shot into the bottom corner.

Unbelievably for the home fans – who are rarely treated to a goal-fest by their defensive-minded team – a third arrived only two minutes later, almost as they were still celebrating the second. This time defender Rashad Sadikhov got on the score sheet with a shot from distance after some defensive blunders. At 3-0, 4-0 on aggregate, the tie was over, and the fans were jubilant coming up to the interval, setting off fire crackers, doing Mexican waves and generally enjoying their first major European scalp. Their team continued pressing forward, and they could have gone in at halftime four or five goals to the good – Krakow were shambolic by this stage. A flag was unfurled with the words “Armenians are busters (sic) and invaders”, (a reference to the still unresolved Nagornno-Karrabach conflict with Armenia), but even the most partisan, politically-driven fans of this club were enjoying themselves at this stage. Chants of “Karr-a-bach” followed the Mexican waves around the C-shaped Olympic Stadium, a crumbling relic built in the time of Stalin.

The second half was more subdued, but it was Karrabach who threatened to score again, going close twice through the impressive Aliyev, who was cutting Wisła to ribbons down the left flank. Against the run of play, Wisla got one back through Pawel Brożek on the hour, but they never threatened to get back into the tie, and their last minute second consolation goal, nodded in by Rafał Boguski, was greeted by silence and barely celebrated by the players. The fans were jubilant on the final whistle and for them the next test is a mouth-watering tie with Borrusia Dortmund. On this form, who would bet against them reaching the group stages of the competition, which would mark the most significant European progress in their history. What with the eyebrow-raising appointment of Tony Adams, England legend, to FC Gabala in northern Azerbaijan (the footballing equivalent of Siberia), as well as the national team appointing Bert Vogts manager, football in the country is going through somewhat of a boom, funded no doubt by oil money.

For Wisła, a long plane ride home, and plenty of soul-searching; but then there’s always the league…