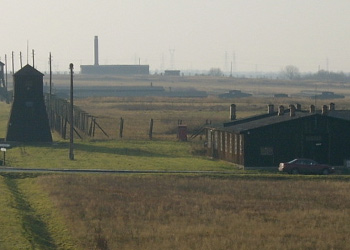 Majdanek, a former Nazi concentration camp located near Lublin in eastern Poland, caught fire Monday night, destroying many of the wooden structures and as many as 10,000 pairs of shoes belong to victims who died at the camp, officials said Tuesday.

The fire started in one of the L-shaped barracks and was noticed by a security guard when he saw smoke coming from the structure as he was making his rounds. The fire department was called promptly but the wooden camp did not have much of a chance. Sixteen fire brigades came to the rescue, numbering 48 firefighters, but it took seven hours to contain the fire, which spread quickly and furiously over the camp.

The source of the fire, which brought an estimated one million złoty in damages, is yet unknown and, although speculations of faulty wiring and premeditated arson have not yet been completely eliminated, they seem unlikely to have been the cause.