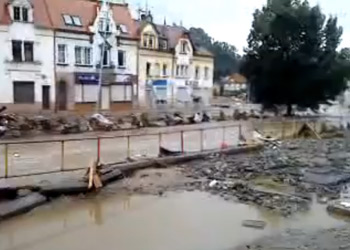 Saturday’s rains left three people dead and hundreds without homes in the southwestern part of Poland. The Miedzianka River flooded most of the town of Bogatynia, located in the Lower Silesian Voivodeship. A dam in Niedowie was broken and caused major interference at the Turów coal mine. Sunday’s wave cumulation on the Nysia Łyżycka River passed Zgorzelec, 27 km north of Bogatynia, but flooded nearby Przedmieście Nyskie and Bulwar Grecki.

More than 500 citizens of Bogatynia are waiting for aid after recent flooding left most of their city uninhabitable. Nearly 7.5 million złoty was made available to provide aid to those in need in the Lower Silesia area, informed Małgorzata Woźniak, spokesperson for the Ministry of the Interior and Administration (MSWiA). The money, which provides a maximum payout of six thousand złoty per person or family, is to be used to purchase basic needs like water, medicine and food. The next wave of aid, in the amount of 20-100 thousand złoty, will be distributed, according to needs, to rebuilt homes.The first 100 citizens are expected to receive their basic needs aid some time today. In the meantime, donations of food, water and hygiene products have already reached the city.

This year’s flood damages have already reached over one billion złoty, a number which is expected to grow with every rainstorm. Two thousand towns and cities have been flooded, forcing more than 30 thousand people to evacuate since May of this year.