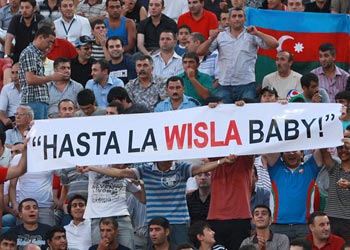 A new season for the Polish Football League began on Saturday, following a nightmare year for Wisła Krakow, crowned with an ignominious defeat on Thursday at the hands of the obscure Azerbaijani club Qarabağ Futbol Klubu. The Azerbaijan team delighted their own fans by taking a thundering 3:0 lead in the first half of the qualifying match in Quzanli before Wisła rallied to produce two goals in late play.

The loss to the unknown club from the troubled Central Asian republic demonstrates amply the massive gulf between Wisła’s aspirations of European glory and the grim reality stemming from the club’s disorganisation and a deep crisis of motivation and morale.

Hopes had been high for the new regime of management under the leadership of returning coach Henryk Kasperczak, but after conceding to hated rival Cracovia in the second-to-last match of the last season, losing the lead spot in the league, and being ushered out of European competition by Qarabağ, Kasperczak hastily announced his return to retirement on Friday 6 August. Speculation has been circulating he was prompted to resign by the top echelons of the organisation.

The club will begin their 2009/2010 campaign in disarray, but the problems do not end at the pitch. The accord that accompanied the construction of their much-touted new stadium has degenerated into acrimonious bickering between the club, the contractors, the designers and the city government over serious design issues including failures to meet UEFA’s published guidelines and requirements, and practical issues. The most glaring of the latter is that the massively expanded stadium is to have only two ticketing offices, which could result in queues that harken back to Poland’s communist past.