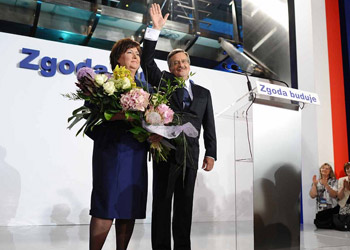 Just a few minutes ago, Poland officially welcomed its new president, Bronisław Komorowski. At 10 am 6 August, Komorowski took the presidential oath in front to the National Assembly (a joint session of the Sejm and Senate), and thus took over the highest office in the country.

The ceremony began with a moment of silence for the late President Lech Kaczyński and those who had fallen in the tragedy at Smolensk. It will be followed by a ceremonial mass and a festive ball later in the day.

To read more about President Komorowski and the future of Poland and the ruling Civic Platform, please see our cover story from this month’s issue of the Krakow Post, “Poland’s New Platform“.