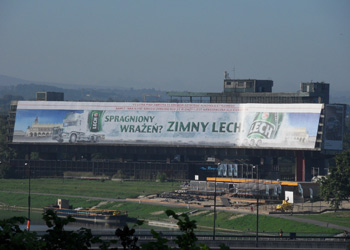 The slogan “Zimny Lech” (“A cold Lech”), used by the brewing company that makes Lech beer, was intended to tempt people to drink the beverage during the hot summer months. A huge billboard covering the entire north side of the Forum Hotel in Krakow was hung to maximise exposure. It was the perfect location, next to a busy road, a newly opened beach that serves the beer, and facing the Wawel Castle, which is bursting with visitors during the summer months.

The advert, depicting a frosted Lech Premium bottle surrounded by ice, with the caption “ZIMNY LECH”, was extensively market tested by Millward Brown SMG/KRC to ensure that it would not offend Poles, especially the PiS party, said Paweł Kwiatkowski, corporate affairs director for the brewery. The majority did not feel the ad carried any connotations relating to the tragedy at Smolensk, so the ad went public. “Zimny Lech” was hung on billboards all over Poland without protest, but as soon as it appeared on the Forum Hotel in July, however, the backlash began.

The reason why the brewing company decided to take down the billboard facing Wawel Castle on 2 August was because, as Kwiatkowski stated, “the lease for the ad space expired”. The company’s decision not to renew the lease was probably influenced by the strong opposition by PiS representatives Marek Migalski and Ryszard Czrnecki, who began campaigning against the ad soon after it appeared on the Forum Hotel. “This slogan is more than inappropriate, it crosses moral boundaries,” said Czarneck. Migalski created a Facebook page titled “Lech – piwo dla chamów?” (Lech – beer for boors?) in an attempt to boycott the beer company. Some tourists and Cracovians were also offended. After visiting the Kaczyński grave on Wawel, “Zimny Lech” could be seen from the castle terraces, which, by default, made people combine the two. “If this billboard were in a different location, maybe it would not be so suggestive, but here…” Wawel visitor Anna Kozioł told Gazeta Krakowska.

Kwaitkowski explained that “Zimny Lech” was not, in any way, supposed to be associated with late President Lech Kaczyński, but with the beer’s refreshing quality on hot summer days. “The phrase ‘Zimny Lech’ appeared on the Polish market as early as February 2009,” said Kwiatkowski.

Although the billboard has been taken down from Forum Hotel, the ad is still running in other parts of Krakow and Poland and on television.