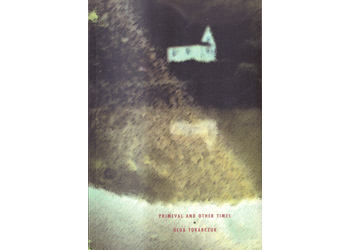 Olga Tokarczuk is one of the most well known Polish writers today, yet distressingly little of her work has been translated into English. Her novel Dom dzienny, dom nocny, published in 1998, was picked up and translated by Granta in 2002 as House of Day, House of Night. But what is arguably her most famous work, Prawiek i inne czasy, published in 1997, has had to wait until this year to finally be published in English by Twisted Spoon Press, under the title Primeval and other Stories.

Set in a mythical village in the vicinity of Kielce (with many similarities to a fascinating real place near Kielce called Kurozwęki), the novel is the saga of three generations, leadding from before World War I to the time of Solidarity in the early 80s. Like House of Day, House of Nigh, the novel is made up of short vignettes, each from the perspective of one of the many characters that move in and out of the narrative. History is very present in this novel, and you get a full feeling for the violence of the 20th century in Poland, from the perspective of one small village.

Primeval is much more than a story of a family, though. Prawiek is not just a village, it is an archetype, and the characters share their village’s mythic qualities. Prawiek is The Village, bordered by the River White and the River Black, and guarded on four sides by the archangels, Rafał, Gabriel, Michael and Uriel. The family at the centre of the saga run the ancient mill, through which the waters of the two rivers flow, grinding the wheat to make the people’s bread. The events that happen carry heavy allegorical qualities, such as how the village squire, Popielski, goes slowly mad playing a game given to him by the rabbi.

Primeval is a story that is historical, mystical, and philosophical simultaneously. The characters are very real, and their lives and experiences captivating. And they are all bound together by Prawiek, from its birth in the aftermath of World War I, to its violent maturity in World War II, to its lingering decline during communism. At the end of the novel when Izydor, the conscience of the village, passes away, you feel the passing away of the village he knew, with its peasants and squires, Jews and Catholics, and its eternal struggle between heaven and hell.Primeval is a wonderful book, well translated by Antonia Lloyd-Jones, and a promising sign that more translations may appear in English of Olga Tokarczuk’s work.