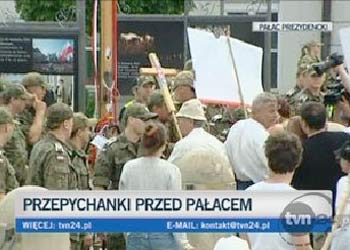 It appears they have won the day, at least, as the church has decided to hold off on the move under the circumstances.

Police, with support from unarmed, uniformed soldiers, struggled to hold back the crowd as the cross was being dismantled about noon. The cross was to have been moved to a nearby church as the memorial was deemed not legal to remain in front of the Presidential Palace.

The move had the support of President-elect Bronisław Komorowski, the Catholic Church in Poland and the Boy Scouts, which had initially helped erect the cross soon after the crash. Mourners had left thousands of candles and flowers beneath the cross and in front of the palace in the week that followed the crash.

Today’s protesters, clinging to crosses, rosaries and Polish national flags, battled with police to push close enough to protect their cherished icon. At least one person was arrested who managed to attach a tether of some sort to the cross and become entwined in the tether. The person was cut free and taken away by police.

See also: Cross to be Moved from Presidential Palace.