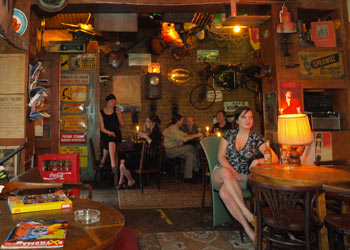 “I’m sorry, buddy, but I wouldn’t be able to make anything out of your painting,” says Andrzej in a polite but resolute tone to the old junk dealer who is still clutching an unsigned, kitschy landscape in his hands. The wrinkled man in his late fifties gazes back pleadingly in a last ditch attempt to convince Andrzej to buy the piece for five złoty. “I got used to bargaining with vendors,” he says, taking a small sip of beer.

After helping to open Singer, the very first atmospheric, candle-lit bar in Kazimierz, Andrzej Jasiak made the decision to open Propaganda in 1998, amassing communist-era items to furnish the new pub. At that time he never imagined that tourists would offer 500 złoty to lay their hands on a single Propaganda souvenir. A few years later, retro propaganda clubs had opened up in cities across Poland. “Before we started searching flea markets we used to simply gather objects from our acquaintances, helping them to make some space in their basements,” he explains.

At first sight Propaganda looks more like a dusty storage room of a small town church than a not-to-be-missed destination on your Krakow pub crawl. The seductive chaos of antique shops reigns here. Walls are plastered with propaganda posters exalting the role of the workers in the spread of socialism in post-war Polish society. Military paraphernalia and everyday objects, such as an impressive Soviet-style stroller, are hooked to the ceiling like pieces of meat in a slaughterhouse.

Though not carried out according to museum procedures, the arrangement of the items on display still makes some sense. Similar objects are grouped together on particular portions of the walls, and the incisive warning signs to enhance personal safety in work areas all congregate near the main entrance. The visit has not yet finished when Andrzej points to a battered portrait of Lenin, pierced by cigarette burns and adorned by a pencil-drawn swastika upon his forehead. “At least clients didn’t steal this.” he says, confessing that sometimes he succeeded in buying valuable Red memorabilia for just a couple of beers.

Andrzej and his business partner Leszek Michno were kind enough to help us in selecting four items from Propaganda’s decor. Our choice fell upon those objects that were supposed to be more representative of life in Poland during communism. We took a snap of all them, convinced that objects can tell the story of a country better than any words or travel guides could possibly do.

According to a national report published in 2001, forests constitute 28.4 percent of the country’s total area. Raw materials to produce paper were never lacking in Poland. Nevertheless, the shortage of common goods, including natural fibre products, haunted the country for decades. Toilet paper was usually sold in strings without packaging, like onions and garlic in Southern Europe. In 1987 local police went berserk when the underground movement known as the Orange Alternative arranged a free open-air distribution of toilet paper in Wrocław.

“Women assigned to machine operations are required to wear a shawl” warns the yellow sign. Followers of the veil debate, one of the latest hits in the Western media, will be interested to know that the Polish shawl, known locally as a “chustka”, has for centuries been a popular head covering among Polish peasants. Despite a generally repressive attitude towards tradition, the Communist authorities decided to restore its usage by force in factories and state-controlled shops for safety and sanitary reasons. The most valuable placards are all displayed to the left of the entrance.

Apart from being one of the most polluting cars of the last century, the East German manufactured Trabant was also a symbol of the communist lifestyle in Eastern Bloc countries. Over a short segment, East and West German motorways actually ran parallel to each other. Trabant drivers could briefly glimpse through their windows at higher performance Volkswagens and Mercedes’ overtaking them on the route that divided Berlin in two. Poland produced its own cars through the state-controlled FSO. That said, we’re still wondering how Andrzej managed to fix the front of two Trabants on to the walls of his pub.

The dreaded ZOMO was a paramilitary force used to quell any form of dissent in communist Poland. Successful candidates had at their disposal some of the finest equipment of the Eastern Bloc police forces. On 16 December 1981, the ZOMO corps had their best chance to test their weapons since the introduction of martial law in the country. Nine pro-Solidarity miners were shot dead during a strike at the Wujek Coal Mine near Katowice. Propaganda visitors should be glad to know that the roaring ZOMO put into a cage by Andrzej is only a dummy dressed in an original uniform.