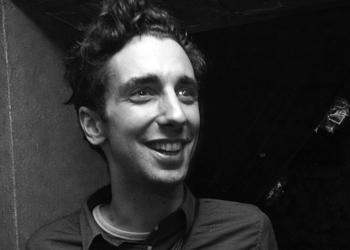 This month, we caught up with Soren Gauger, a Canadian writer and translator who’s spent the better part of the last decade in Krakow. Soren’s translation of Wojciech Jagielski’s Towers of Stone came out last winter, and his rendition of Bruno Jasieński’s I Burn Paris is out later this year. He is currently working on his own mini-novel, to be titled Unspeakable Things, which should be out in the next year or two.

KP: If you could live anywhere in Krakow, where would it be, and why?

SG: The “new” Jewish cemetery and the sausages at Hala Targowa.

SG: These are very hard questions to answer in a way that preserves one’s dignity.

SG: That extraordinary wheelchair-bound Roma violinist who was about the size of a five-year-old child, and who used to sit in the alcove of the Sukiennice chain-smoking and playing hot jazz that reminded you of Django Reinhardt. He died about five years ago.

SG: “City beautification projects” like those idiotic Chopin tribute installations, Art Boom, that most recent Pilsudski monument, anything that looks like a bureaucrat’s notion of public art.

SG: I haven’t seen the sun in months.

Both. Neither. It depends.