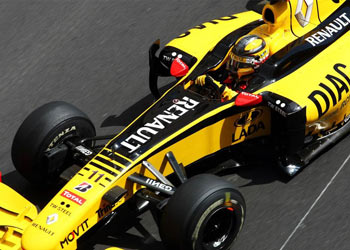 Polish Formula One sensation Robert Kubica has led his Renault team to what has amounted to an important comeback at a critical time in the team’s history. Plagued by scandal and three years of below-par performance, the team could hardly be more pleased to have added Kubica’s mild temper, precision driving skill, strong work ethic, and dedication to car development. In a sport sometimes sullied by dirty tricks and prima donna ego trips, Krakow’s Kubica is the antidote to what ails.

All the team needs now is faster cars, which they appear to be one step closer to making a reality by adding a feature that has given the series leaders a clear advantage all year. The question is, with the season more than half over and Renault and Kubica stuck in second gear, will the addition of this year’s cunning new aerodynamic package be in time to make a difference?

The feature in question may be the sneakiest technical addition to open wheel racing in the history of the sport: the controversial F-duct. When the F1 community began clamouring around the mysterious variable aerodynamic qualities of McLaren’s cars at the opening of this year’s series, it was clear that if whatever the McLaren engineers had dreamt up was legal, everyone was going to want one of their own.

The F-duct’s operation works because the F1 car is designed to make maximum use of airflow around the car to achieve powerful downforce, giving it the greatest possible grip during medium- and high-speed turns. The wings, fins, and underbody features that work to create this downforce are subjected to a lot of very specific rules, one of which is that the big wing in the rear cannot include any airplane-like movable surfaces that would stop it from producing downforce on the straightaways where it just produces drag, forcing the car harder and harder down onto the track as speed increases, wasting energy and sacrificing speed.

The F-duct uses a stream of air gathered through an intake in front of the driver and passing through a duct in the cockpit, which then can be vented out onto the rear wing, disrupting the streams of air over the wing, reducing its ability to suck the car down onto the track. Because the rules strictly prohibit any mechanical switches or valves to change air flow during the race, the inventors of the F-duct found a way to make the switch without mechanical assistance: the driver can switch the airflow to no-drag straightaway mode by plugging a hole inside the cockpit with his own elbow or knee.

This particular engineering waggle has also proven harder than previous ones for other teams to duplicate, because of F1 rules concerning modification to the car body during the season.

The teams that currently lead the standings in F1 are all ones that developed the F-duct relatively quickly, with the exception of Red Bull, who took longer to develop their system while simply relying on already astonishingly quick conventional cars. For Renault, the focus remained on perfecting other dimensions of their cars for the first half of the season, and their F-duct is only to be put into operation at the Belgian Grand Prix in Spa in the beginning of August.

If Kubica remains at Renault as reported, work on the other dimensions of their game may give the team a more solid foundation going into 2011, when the F-duct is presumably to be disallowed anyway. For fans of Kubica and Renault, the big hope will be that the system works. If it does, it will still take a heroic effort for Krakow’s racing hero to move ahead of his rivals and take a top-three spot before the season draws to an end in October.