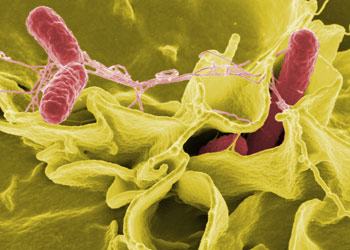 Scientists from Krakow’s Jagiellonian University have developed a genetically modified Salmonella bacterium strain that can destroy cancer cells. This cheap therapy has seen success in mice, and the human test phase is imminent.

“In our therapy we focus on mobilising the body’s own resources to fight tumours instead of implementing radiotherapy or chemotherapy, which often carry harmful side effects. To combat our great enemy, cancer, we use another potential human foe, the Salmonella bacteria strain, but modified genetically to disarm its harmful effect on the human organism,” explained Joanna Bereta, PhD, from the Immunology Department at the Jagiellonian University’s Collegium Medicum, and the present coordinator of the project. She is continuing the life work of her late husband, Professor Michał Bereta, who passed away in 2008. He had continued his pursuit of this non-invasive therapy even after a major American pharmaceutical company had given up on a similar study.

Salmonella bacteria infection is a known food poisoning factor around the world. It can cause diseases such as cholera and typhoid fever. After a short incubation period of a few hours to one day, the germ multiplies in the intestinal lining, causing an intestinal inflammation with severe diarrhoea. Professor Bereta’s team has used Salmonella’s natural aggressiveness in attacking the host’s cells and turned it against the cancer. “We can say that when entering a body Salmonella is ‘searching’ for the cancer cell to ‘hide’ it from the human immune system that would attack it,” says Professor Joanna Bereta. “Genetic modification of the bacterium includes equipping it with a part of an antibody, specialising in recognizing the tumour’s specific antigens. These antigens are what differentiate the tumour cell from any other cell in the system and facilitating its location inside it,” explained Dr. Bereta. After entering into a tumour, the Salmonella infects it and causes its destruction from the inside.

What is more, being “hidden” inside the tumour, the bacterium “attracts” the human immune system’s response to the tumour presence. This is the key to a state-of-the-art therapy method, called immunotherapy, which is based on an organism’s inner defence mechanisms, as normally the human immune system, which fights viruses, fungi, bacteria and other parasitic organisms, is resistant to attacking its own cells, of which the tumour is made. In some cases the immune system has even been noted to having nourished the tumour, treating it as a part of the body, as it develops slowly and cunningly. The Salmonella infection allows the immune system to treat the tumour as it should be treated – as a hostile growth.

“Another genetic modification done to the Salmonella bacterium was debilitating its malign qualities, so patients undergoing this therapy in the future will not be exposed to the conditions it creates,” says Paulina Chorobik, Professor Bereta’s team member responsible for carrying out laboratory tests, whose work focused on developing the right strain of Salmonella. The third genetic change implemented is increasing the bacterium’s natural cytotoxicity, or the ability to kill tumour cells. The effectiveness of the prototype Salmonella therapy has already been confirmed by tests on mice. The next step is the further perfecting of the strain and tests on large mammals.

“Every year in Europe about one million people are diagnosed with various types of tumours, and they could be helped with Salmonella therapy. A patent procedure for the strain has been launched, and we are also working to secure funds necessary for completing pre-clinical tests. When this second phase is completed it will be much easier to attract future investors, such as renowned pharmaceutical companies like Merck and Roche,” explained Dominik Czaplicki from the Jagiellonian University’s Innovation, Development and Technology Transfer Centre.

According to scientists from the University’s Collegium Medicum department, in the future this technology could become a possible treatment for patients suffering from various types of inner organ solid cancers, and probably also other varieties, such as melanoma. The foreseen effectiveness and low production costs make the outcome of research very attractive from a commercial perspective. This innovative technology from Krakow was recently awarded a prize for the Polish Product of the Future. However, no timeline has been set for its implementation yet.

“|It is a long way from the idea to actual treatment, but our therapy has a strong scientific foundation. However, tests on mice do not guarantee ultimate success of therapy in people,” stresses Dr. Bereta. The newly developed Salmonella strain has not yet been specifically named, but as Professor Joanna Bereta imagines, it will most probably bear a mention of Professor Michał Bereta.