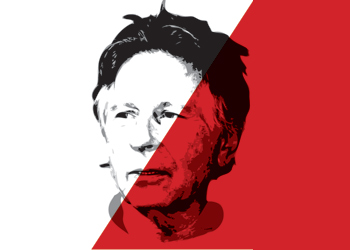 The recent Swiss decision is as surprising as their sudden response last year to the slowly turning wheels of American justice, which resulted in Polanski’s detention, followed by eight months under house arrest in the golden cage of his luxury chalet in Gstaad. The director must stay off the radar now, and the list of countries where he may feel more or less safe has grown thin, as it seems.

Except for those holier-than-thou voices to whom he is nothing but a child molester, Poles, including the present government, love Polanski, because he has always made us proud for being “our man in Hollywood”. Just watch the 1981 cult comedy Miś, in which the protagonist pretends to speak on the phone with “Romek” about his next film. “Polanski? The famous director? Miś, you mustn’t waste such a chance!” urges his awe-struck girlfriend. This reminds me of a famous sentence from Witold Gombrowicz’s novel Ferdydurke (filmed by Polanski’s friend Jerzy Skolimowski as 30 Door Key): “Why do we love Słowacki..? Because he was such a great poet” comes the ultimate and peremptory reply.

Yet just where exactly, besides Poland, will the director now feel safe to be at large?

France – that is pretty clear. He is a French citizen, a member of the Academy of Fine Arts, and a sort of national treasure. President Sarkozy personally advocated on Polanski’s behalf, and historically, the French share an animosity towards the U.S.

Paradoxically, Switzerland also appears an option, even though this country of three official languages and only one national hero (whose actual existence is still disputed amongst historians) seems to be slowly abandoning its splendid isolation and neutrality of yesteryear. (Is there any sand in the cogs of the clockwork country?)

Hector Berlioz, a great composer besmirched by critics on a regular basis, used to say: “Start collecting the rocks they throw at you; they will build your future pedestal”. If such criticism is solely limited to one’s artistic work, this uplifting aphorism is quite adequate. But there are cases when one should rather keep shtum.

Polanski has joined the ranks of other great artists immortalised by their work, yet hopelessly flawed in their private lives. The director, who has lived his entire adult life in the age of the mass media, has been less lucky than, say, Picasso. To anyone with an IQ above room temperature, the latter name is synonymous with “painter” or “famous artist”, but only committed readers know that he was a domestic tyrant, prone to violence. Is Marlon Brando remembered only as a well-hung, testosterone-stuffed sexual icon of the fifties, or, as he described himself, an ageing, balding, overweight failure, haunted at the end of his life by the tragic fate of his children? Probably both, since his life was well-documented on film and television. At the height of the internet age, the name Polanski is being inevitably associated with unlawful sex with a minor, statutory rape, or even paedophilia.

Well, he did have sex with a 13-year-old model in 1977, and even though she was not a virgin at the time, it was still a criminal act. The media lynched him, as they did several times before. And no wonder, since long before the Manson “family” carnage, Polanski had already acquired a firm reputation as a notorious womanizer. According to a friend, Polanski “had either f**ked their girlfriends or their wives.”

One thing is certain: he has changed over the years. People who worked on The Pianist remember the director as a warm and lovable person. This seems like light years from the times of filming Chinatown. When Faye Dunaway asked Roman about her character’s motivation, he would shout: “Just say the f**king words. Your salary is your motivation!” On another occasion, she complained that “that little putz plucked my hair!” Many of the crew seemed to share Polanski’s disdain for Dunaway, yet according to my parents and their friends, who knew Romek in Krakow circa 1950, he had always been a notorious troublemaker, performing mean jokes on his fellow art school pupils. A little later, at his stepmother’s request, my aunt tried to help him enter Russian Studies at the university as a last resort from being drafted. Romek failed the exam and was considered to be a total dunce, even before he insulted the professors. Then again, all who knew him later in his life claimed that he was a brilliant man, the best read and most cultured of people.

I live some 150 metres from a tenement house where a Jewish family named Liebling lived with their little son Roman in the late 1930s. A few years later, the adjacent house provided the seat for an underground theatre founded under German occupation by Karol Wojtyła, the man who later became Pope John Paul II. Every time I walk down this short street, it is hard not to be drawn into contemplation about the tides of history and the human condition in general.

So who exactly is Roman Polanski? Everyone should answer this question for themselves. Depending on your views, he might be:

Whatever you find true, his entire life only proves that he is just human, with all the inherent qualities and faults attached.

One thought on “The Many Faces of Roman Polanski”