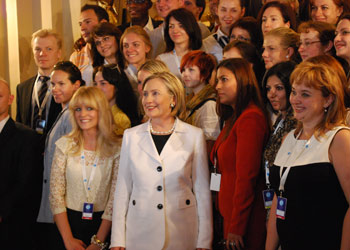 Poland fulfilled a double role as the host of this year’s 10th anniversary of the founding of the Community of Democracies – a gathering of top diplomats who are continuing the debate on the global commitment to democracy and demonstrating methods of support to those countries striving towards democratic governments. Ten years ago, it was Warsaw where the official delegations from 107 countries met, just years after the communist regime collapsed, giving many states from the Central and Eastern European region a chance to affirm their determination for freedom and democracy.

During the first years of transformation, Poland made a clear statement internationally about the importance of respecting and strengthening the universal rule of law and international relations, including human rights and fundamental freedoms. Polish activity in this field was developed by the first Polish minister of foreign affairs after the collapse of communism in 1989, Krzysztof Skubiszewski, and was continued by Professor Bronisław Geremek, who served as foreign minister under Prime Minister Jerzy Buzek (now president of the European Parliament) from 1997 until 2000. In democratically-governed Poland, Geremek played a key role in its accession to the European Union and NATO. He also was a chairman of the Organisation for Security and Co-operation in Europe (OSCE) and at the same time acted as a proponent of the humanitarian intervention (in the context of NATO intervention in the former Yugoslavia and the situation in Kosovo). Professor Geremek, together with former U.S. Secretary of State Madeleine Albright, initiated the Ministerial Conference in Warsaw in July 2000, which led to the founding of a global intergovernmental coalition of democratic countries declaring a common purpose expressed in the Warsaw Declaration. The final document summarises common rights and values of the signatory states with an aim to promoting these norms around the world, and is based on the purposes and principles set forth in the Charter of the United Nations and the Universal Declaration of Human Rights.

Krakow’s conference, held on 2-4 July, was organised by Polish Foreign Minister Radek Sikorski and gathered many dignitaries, including high ranking politicians from over 100 countries, former heads of states and governments, activists, representatives of NGOs, as well as observers. Amongst the guests were the first democratically appointed Polish prime minister, Tadeusz Mazowiecki, the legendary Solidarity leader Lech Wałęsa, and former U.S. Secretary of State Madeleine Albright.

This year, the High Level Democracy Meeting of the Community of Democracies aimed at renewing the Warsaw Declaration and drawing up a Global Democracy Work Plan, which would help to set the targets for the international community in the coming years. The Plan scheduled recommendations, as well as concrete actions, to be undertaken in the fields of enabling and protecting civil society, gender equality and women’s rights, poverty, development, democracy promotion and regional cooperation.

The workshops and workgroup debates, organised alongside the meetings of young diplomats and NGO discussion corners, were followed by ministerial panels held in the Słowacki Theatre. There, the conference host’s introductory speech defined the problem facing today’s emerging democracies: “We see legal and moral limits on the state as a source of strength, [while] enemies of democracy see limits as a form a weakness. The economic success of one party states boost those who say that democratic limits are a luxury. In the EU, as across the Atlantic, we see anger that government is too big, too remote, too clumsy.”

U.S. Secretary of State Hillary Clinton also came to Krakow for the conference. In her speech, she referred to the process of regaining democracy from a Soviet regime: “I would argue that this progress was neither accidental nor inevitable. It came about through a generation of work to improve governance, grow the private sector, and strengthen civil society. These three essential elements of a free nation – representative government, a well-functioning market, and civil society – work like three legs of a stool. They lift and support nations as they reach for higher standards of progress and prosperity.” She also highlighted the importance of civil society in moving a state towards a real democracy: “Democracies do not fear their own people. They recognize that citizens must be free to come together to advocate and agitate, to remind those entrusted with governance that they derive their authority from the governed. Restrictions on these rights only demonstrate the fear of illegitimate rulers, the cowardice of those who deny their citizens the protections they deserve. An attack on civic activism and civil society is an attack on democracy.”

The premise of seeking an international debate on the global issue of democracy allowed for political representatives from countries where democracy is not a given political system to explain why their countries have decided to reach for it. Foreign Minister of Indonesia Marty Natalegawa and Richard Onyoka, deputy foreign minister from Kenya, both stressed the necessity for democracy to be a homegrown and inborn idea.